Guests will leave the lodge around 9 AM after breakfast each day, fishing until around 1 PM. Following lunch and the traditional siesta (the hours of which will depend on the season), guests return to the river between 5 and 6 PM and fish through until dusk. The first brown trout were stocked in Tierra del Fuego by John Goodall back in 1935. Shipped from Puerto Monte in Chile, 60,000 “Salmo Trutta” eggs survived the arduous journey, to be planted on the Candelaria and McLennan Rivers, both tributaries of the Rio Grande. These fish eventually found their way to the sea, possibly attracted by the rich nourishment of the estuary. These sea-run brown trout now complete the yearly migratory cycle of all salmonids, spawning during the summer months in freshwater.

Salmo Trutta remain in the river for a period of time which ranges between 1 and 4 years, until their first migration to the sea, where they feed and grow for about 6 months before their first return to freshwater, weighing approximately 6 lbs. Researchers have found trout which had spawned more than 6 times. A trout which has completed 4 cycles of returning to freshwater can weigh over 20 lbs. The frequency with which they return to freshwater is also an indicator that the fish face very few threats. This provides a very clear example of the benefits of Catch and Release. Guides are equipped with nets, and will assist guests in weighing and releasing fish without damaging them.

Beats are within 25 minute’s drive of the Lodge, in most weather conditions. Villa Maria probably has the freshest fish of the three sister lodges, especially in December and January. It is the most comparable to the big Scottish rivers, and thus best fished with double-handed rod, as the pools are very wide. There is also easy access to alternative rivers such as the Ewan (for Browns and Brooks).

Since the fishing is all from the bank or wading, the only equipment in question is the small fleet of all-terrain vehicles that drive to more remote fishing sites.

To get to the Villa Maria Lodge, you will need to make reservations to and from Rio Grande, Argentina, via Buenos Aires. The flight will take 3 hours. You will likely need to overnight in Buenos Aires before departing on a morning flight to Rio Grande. A lodge representative will meet you at the Rio Grande airport and transport you to the lodge in a four wheel drive vehicle. The transfer from Rio Grande airport to the lodge by four wheel drive takes 1 1/2 hours. On arrival at the lodge, guests are welcomed with cocktails and the entire Villa Maria staff. The lodge is located in a renovated farm house within the working Estancia Jose Menendez. The Main house is situated a short drive from the river.

Slipstream is a full service travel company that can handle a variety of services relating to your trip. For assistance, please contact us directly at +1-866-644-7703.

Prices are based on single room with shared guide 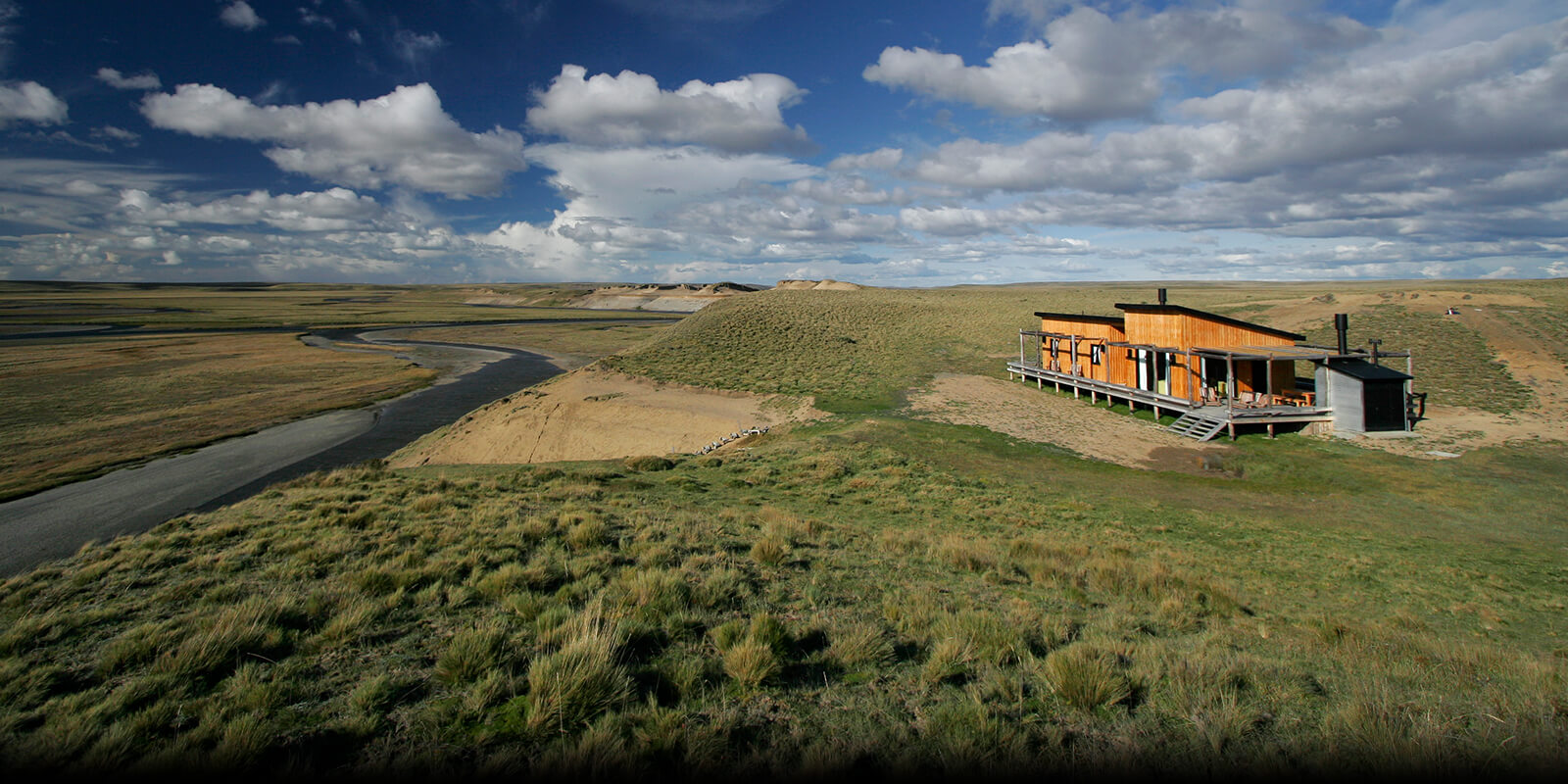 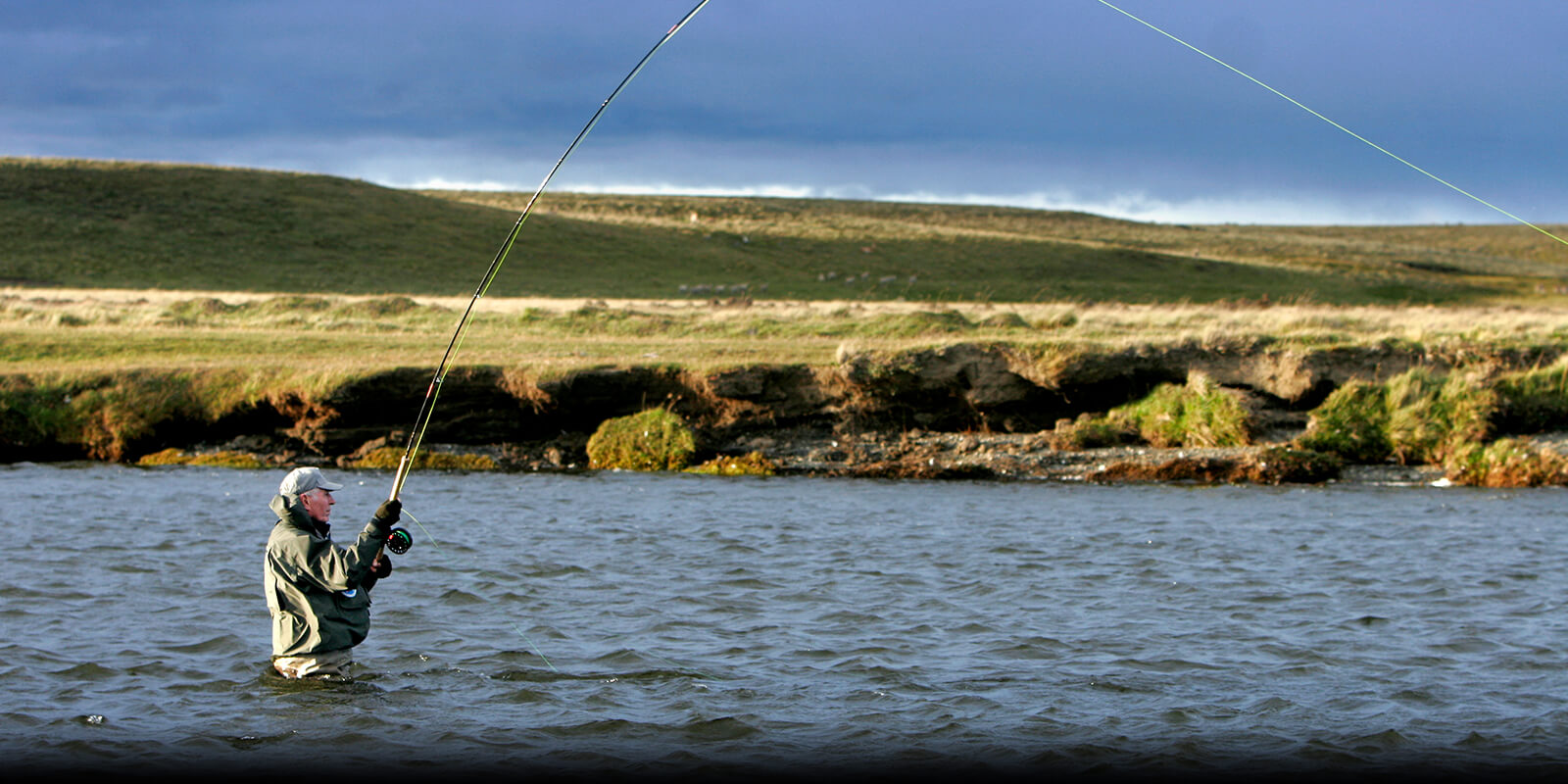 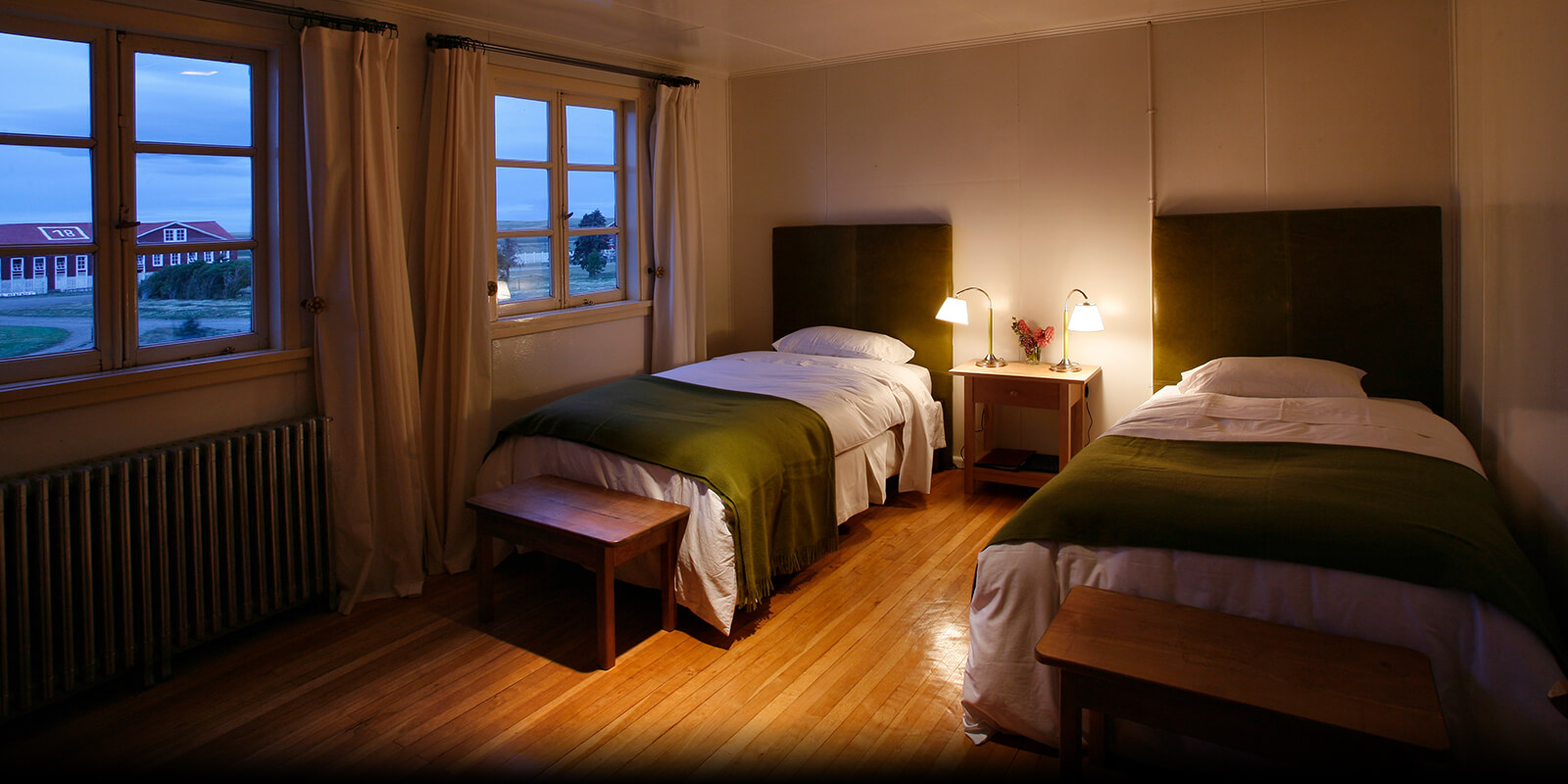 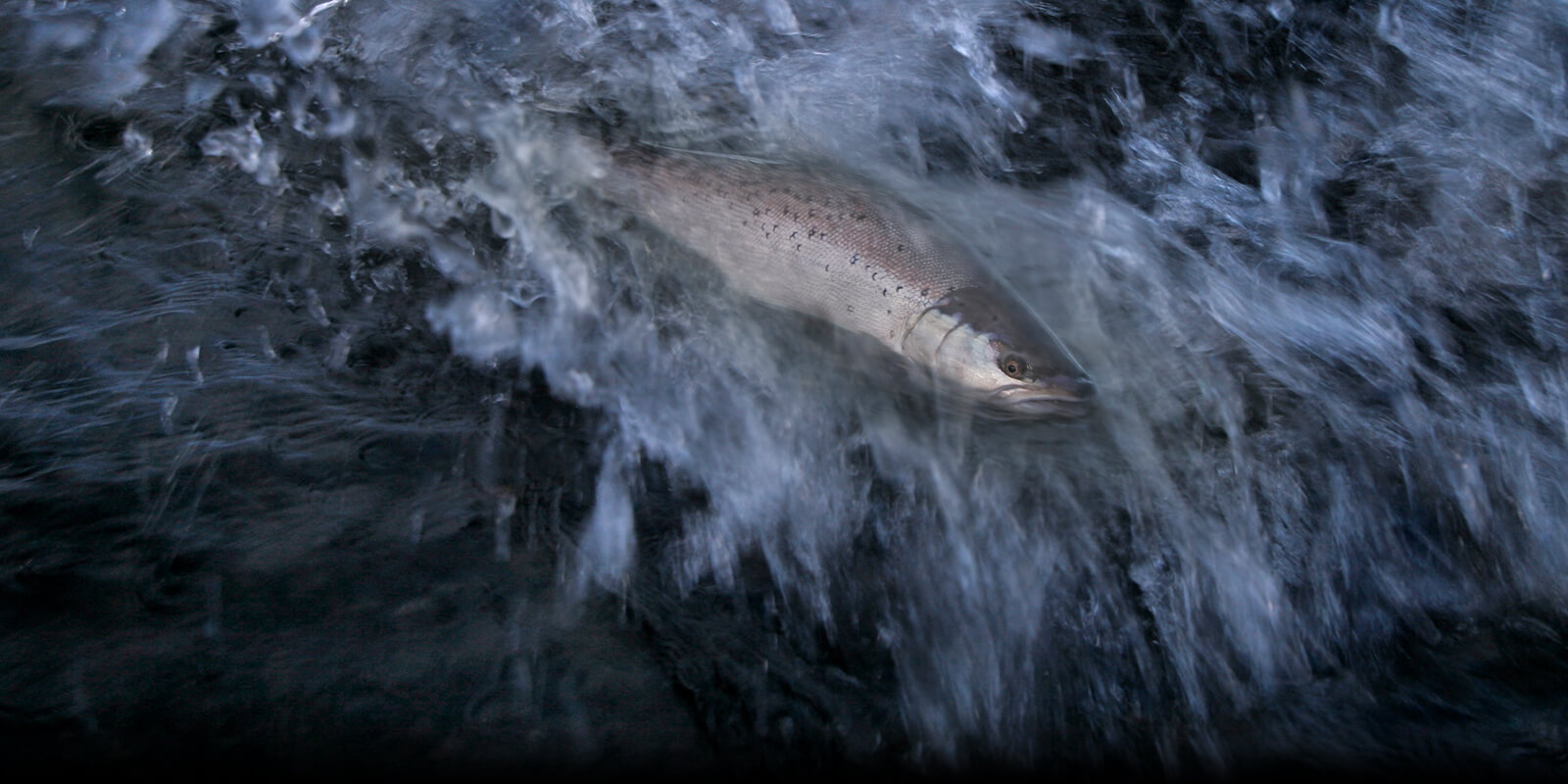 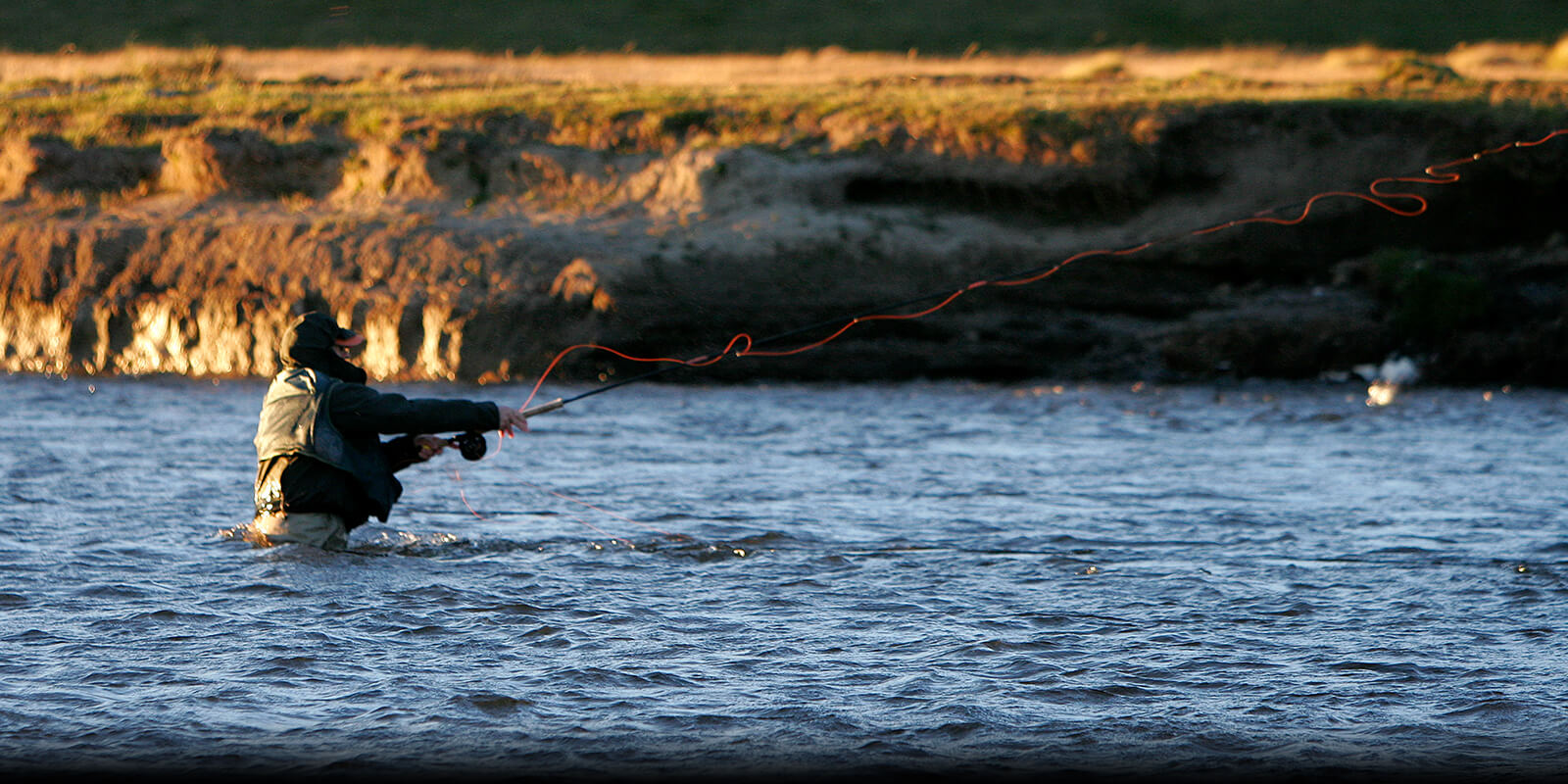 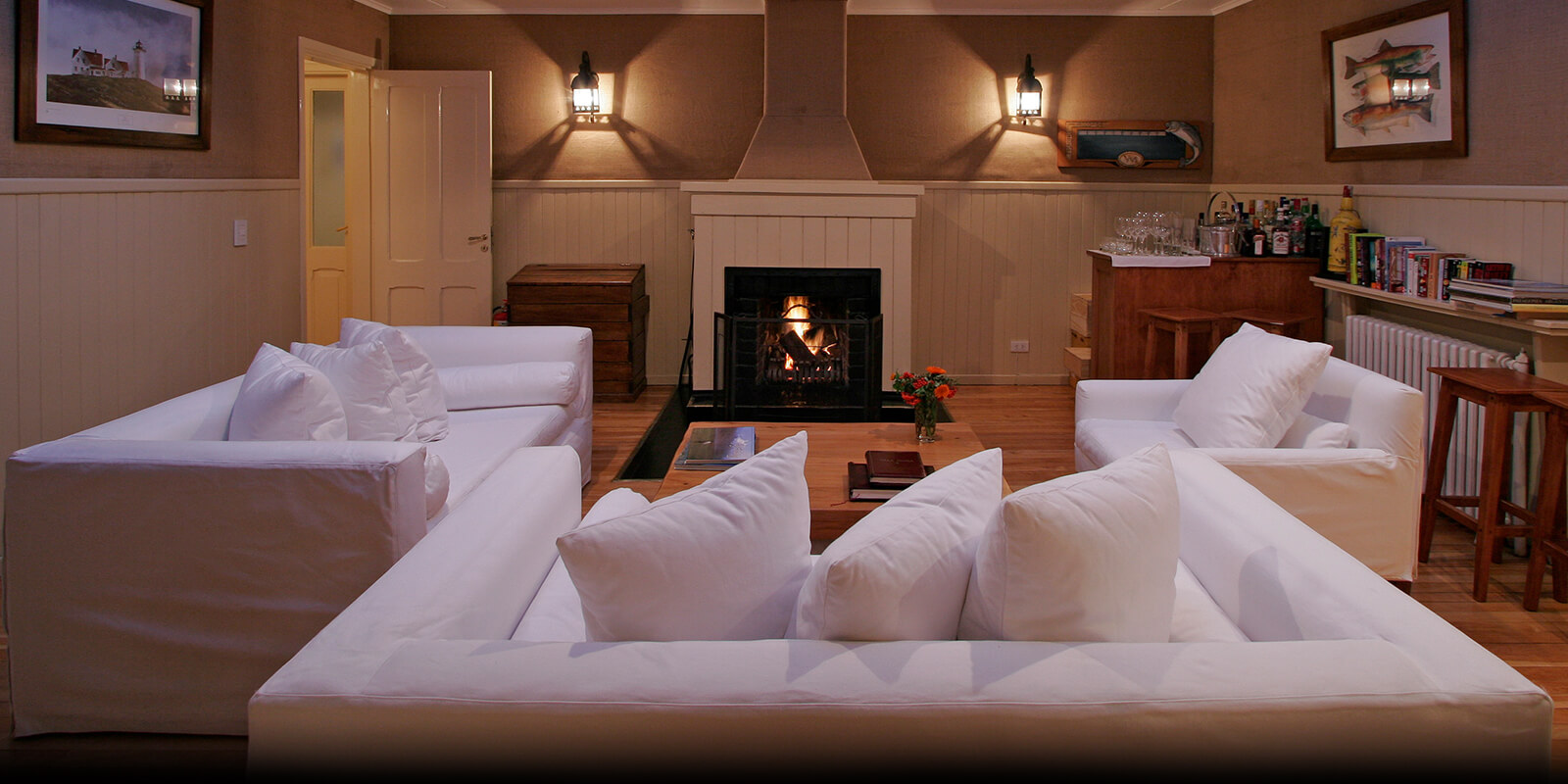 The lodge is located on the banks of the Rio Grande, in Tierra del Fuego, Argentina.

December though to April : Christmas through March is prime time.

Turnaround days at the lodge fall on Sunday. This means that guests will have to fly into BA on Saturday in order to catch the Sunday flight from BA to Rio Grande. On the departure day, guests should either book a late afternoon or early evening flight out of BA or plan to spend Sunday night in BA and then fly home on Monday.

The Estancia or Ranch-house is a magnificent white and terra-cotta coloured building with several new out-cabins. The standard package at Villa Maria is 7 nights, with 6 days of fishing, and most often involves one overnight stay in Buenos Aires, and some transfers en route. Villa Maria Lodge was designed to offer anglers maximum comfort during their fishing trip, as well as easy access to the pools.

The lodge accommodates up to 6 guests in three spacious guest bedrooms, and has a large living- room that opens up on vistas of the Menendez Valley and Rio Grande Valley. There is a large fireplace and a well- stocked bar, as well as a tackle shop. Internet access and telephones are available. Villa Maria offers wonderful cuisine and fine dining based on local meats, fresh vegetables and delicious deserts. A traditional Asado (BBQ) will be held once during your stay, and you can sample different cuts of meat and wonderful salads. A full cooked breakfast will always be available, together with fresh fruits, yogurts, home- baked breads, jams, and a selection of cereals. Villa Maria’s cellars feature a wonderful selection of fine wines from the Luigi Bosca Bodega, which will be served during lunch and dinner.

American, Canadian, British, EU and Australian guests will need a valid passport and return plane ticket to enter Argentina. Visas for these nationalities are not required.