The Miramichi River system has an average annual spawning run of approximately 50,000 Atlantic salmon, making it the most prolific salmon river in all of North America. Among its many branches, the Main Southwest Miramichi enjoys an international reputation as the epicenter of this sport in the province of New Brunswick. Baseball legend Ted Williams loved this area, and reputedly caught over a thousand salmon nearby on the Miramichi.

The Miramichi is known as “the mother of all salmon rivers” for hosting the largest runs in the world of Atlantic salmon, that ‘king of game fish’. Wilson’s owns and leases more private water on the Miramichi than any other outfitter or individual – a total of 16 pools, many of them among the river’s finest, which means that they can provide clients with Atlantic salmon fishing virtually unmatched, for variety and quality, in all of Atlantic Canada. The very names of the pools are evocative, and include Lyons’ Rapids, Cold Water, Maple Island, and Buttermilk Pool.

The “king of game fish” is back! Thanks to recent rigorous conservation efforts, Atlantic salmon fishing in Atlantic Canada, and notably on the Miramichi, has returned to near “good old days” levels and continues to improve each year. Wilson’s controls the most, and many of the best, private pools on “the mother of all salmon rivers”, thus offers clients unmatched opportunity for tangling with the toughest and noblest game fish of them all. Whether it’s bouncing a dry- fly down a ripple, or swinging a wet- fly over a deep, “sure-thing” lie, the expert guides will soon have you “reading the river”, and fishing like a pro. Wilson’s five guides have, between them, nearly 150 years’ experience of the river. There is nothing worse than being stuck in a salmon camp with 8 or 10 anglers, and only one or two reliable pools. At Wilson’s, they fish only 6 rods a day, and rotate them over 16 pools!

Many experienced anglers believe that nothing in game fishing compares to the reel-sizzling runs and acrobatic leaps of the Atlantic salmon. From mid-April, we fish for salmon that have been in the river during the winter, from the fall spawn. We start fishing just as the ice is leaving the river. The water is quite high then, so we’ll use small motor boats to fish. The weather is also colder then, so warm clothing is a must. As mentioned, all fishing is done from a boat, by either letting out a troll, or on a short cast next to shore.

The spring season is barely over before we are into the “sea- run” brook trout, (1-6 lbs) and the early rocky brook run, Atlantic’s best fishing for this run is between May 20th and June 10th. There is also an opportunity, during the month of June, to fish the fantastic shad run. The summer season begins mid – June, when the first new run of salmon are on their way into the river. The first new run of salmon starts about mid-June and lasts until mid-August. The water is down now, so we can wade the pools and use canoes to go from pool to pool. The weather is of course much warmer (50-85 F), so light weight summer gear is appropriate.

Due to the warm afternoons, we fish the mornings, (8:00am-12:00pm/noon), come in for dinner, rest a few hours and then head out about 4:00pm again. The evening shore lunch is always very enjoyable, sometimes the guide will even grill a fresh salmon over an open fire. The late season, or second run of the year, starts mid-August and is on until mid-October. This fall run offers some of the best salmon fishing of the year, and in October can be mixed with woodcock and grouse gunning, for a “Cast & Blast”. During the fall season, we fish from breakfast until the evening dinner having a shore lunch on the river also. The salmon are sometimes a little bigger than the July run, because the fish are getting ready to spawn at this time. We also arrange day trips to the Cains River in October.

The province of New Brunswick has three wild Sea-Run Trout river stocks, the Cains River is by far the largest, and one of the healthiest. The Cains has been under very strict conservation laws and practices for 14 years, and those efforts are paying dividends today. Camp records and personal records are being set almost every season now. It is not uncommon to take fish in the 4-5 pound range on a good night, however, these are truly wild fish and are not easily fooled. Dry fly-fishing is our specialty on the Miramichi.

The Cains River is a small tributary of the Miramichi River. The average width is app. 10 meters, and most pools fish just one or two rods at a time. The river source is made up of large cedar swamps, which keep the water very cold, and thus an ideal habitat for large trout. The water is very dark in color, so you do not see the trout until feeding time. The best pools are only a short drive from the main camp, and can also be reached by canoe during the higher water periods. A float trip on the Cains for these huge sea-run trout is always a big hit. You and your guide will fish a ten-mile stretch of the river, which many years of experience have shown to be the most productive.

Drift fishing is done in canoes, either Chestnut canvas canoes or Kevlar. Fly and spin fishing

Guests will fly into Fredericton or Moncton. There are daily flights from either Toronto or Montreal to both cities. From there guests will fly up to Miramachi, the largest city in Northern New Brunswick. A shuttle will pick guests up at the airstrip and drive them to the lodge. 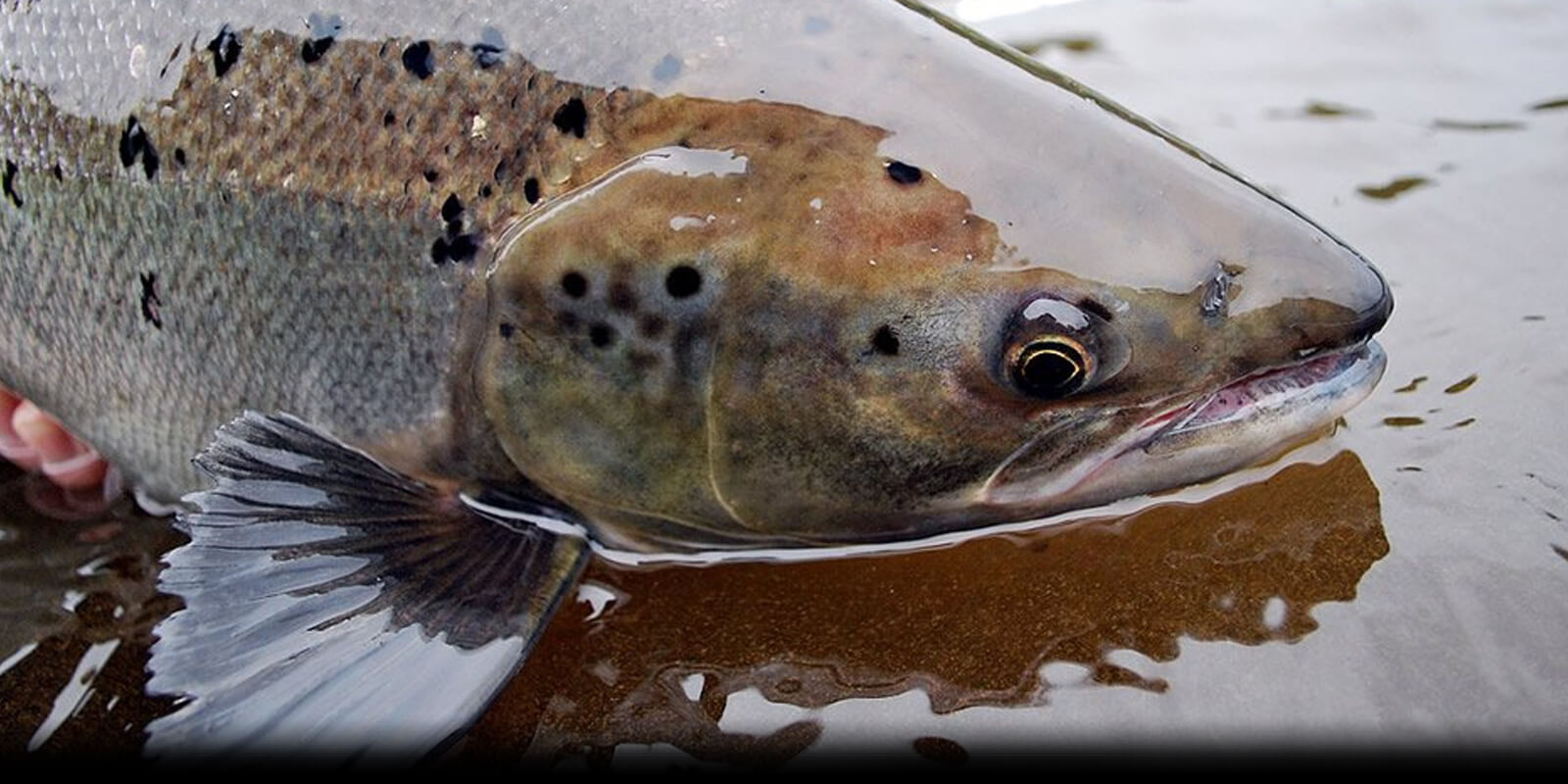 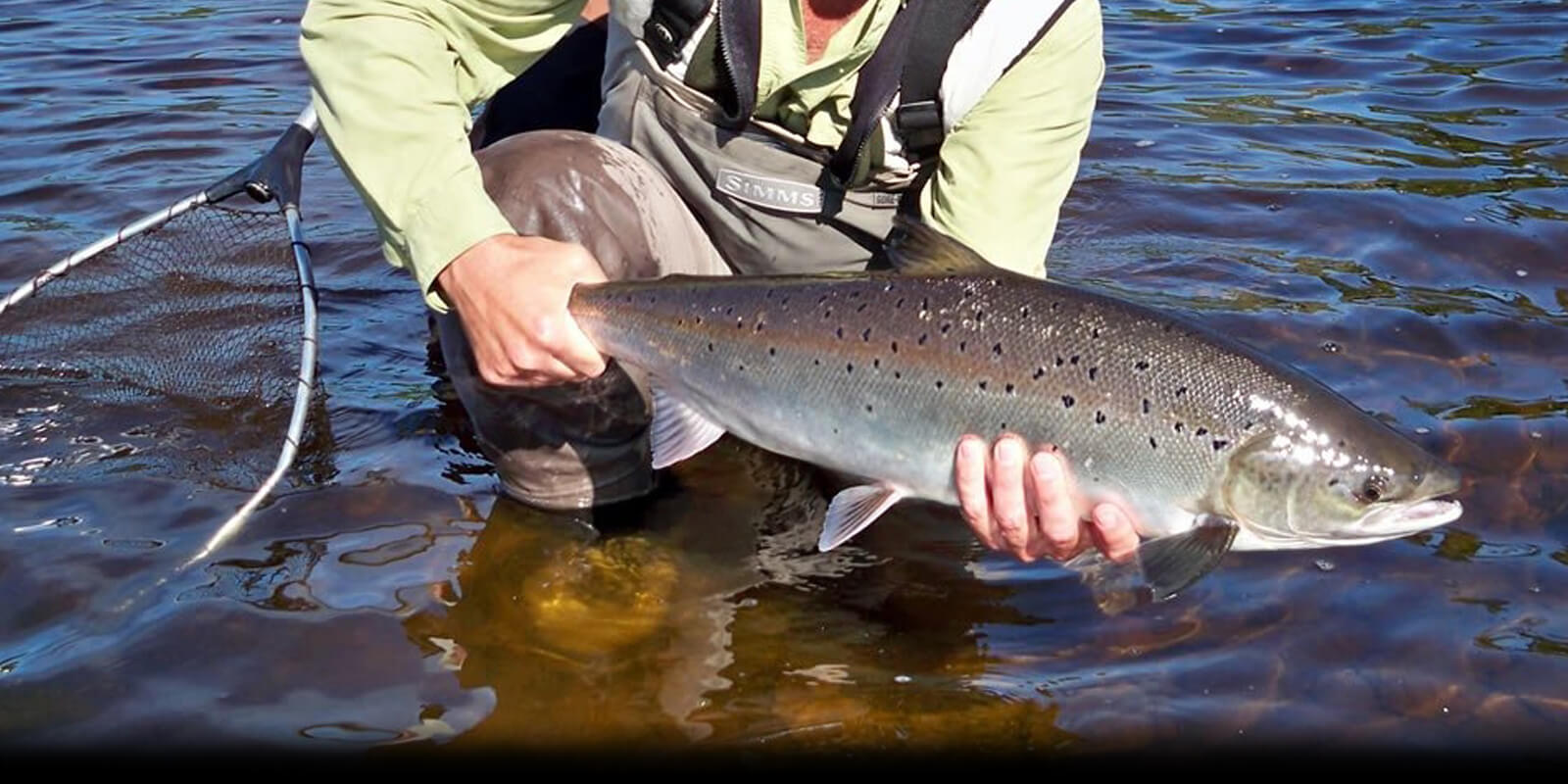 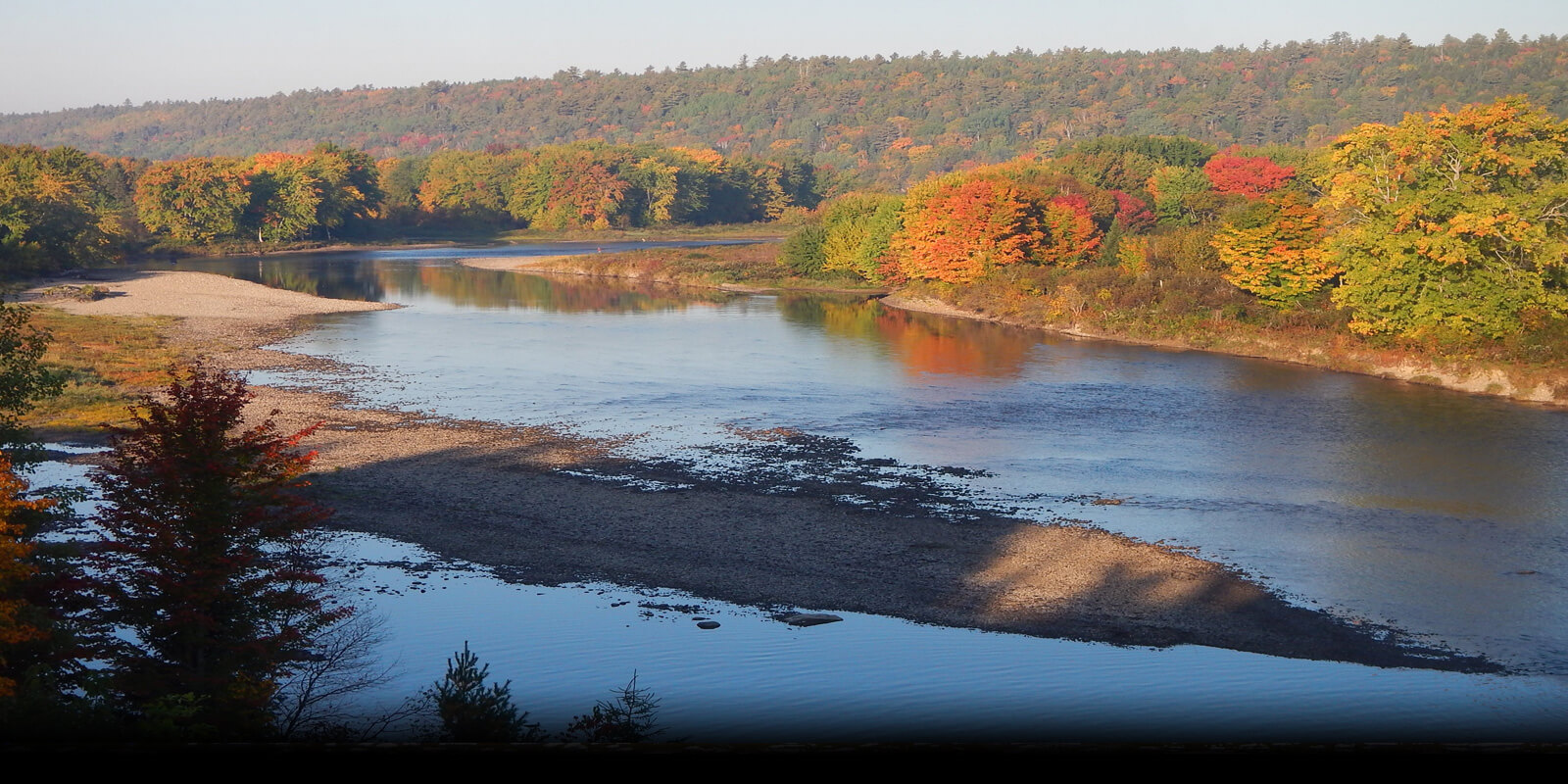 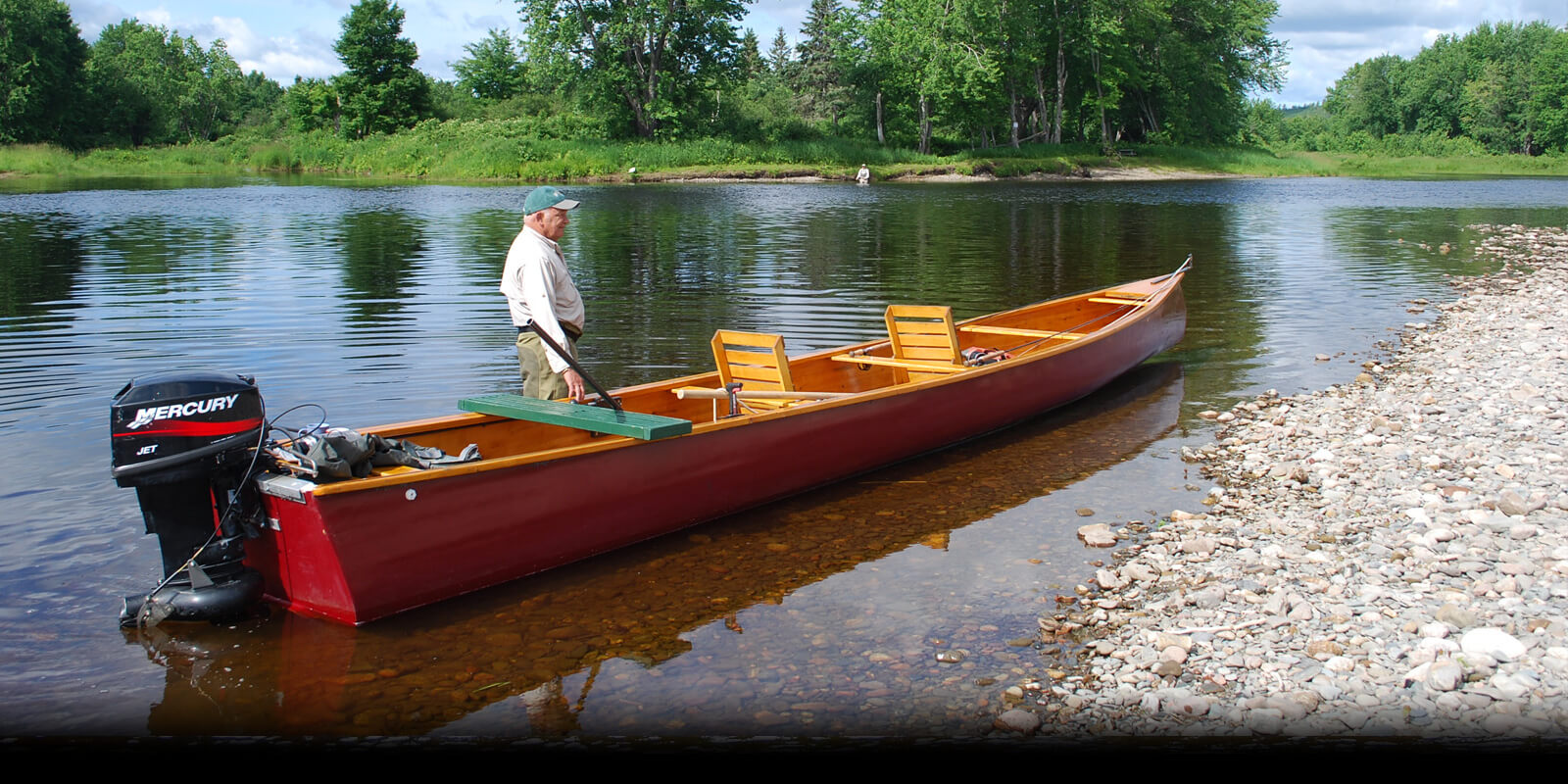 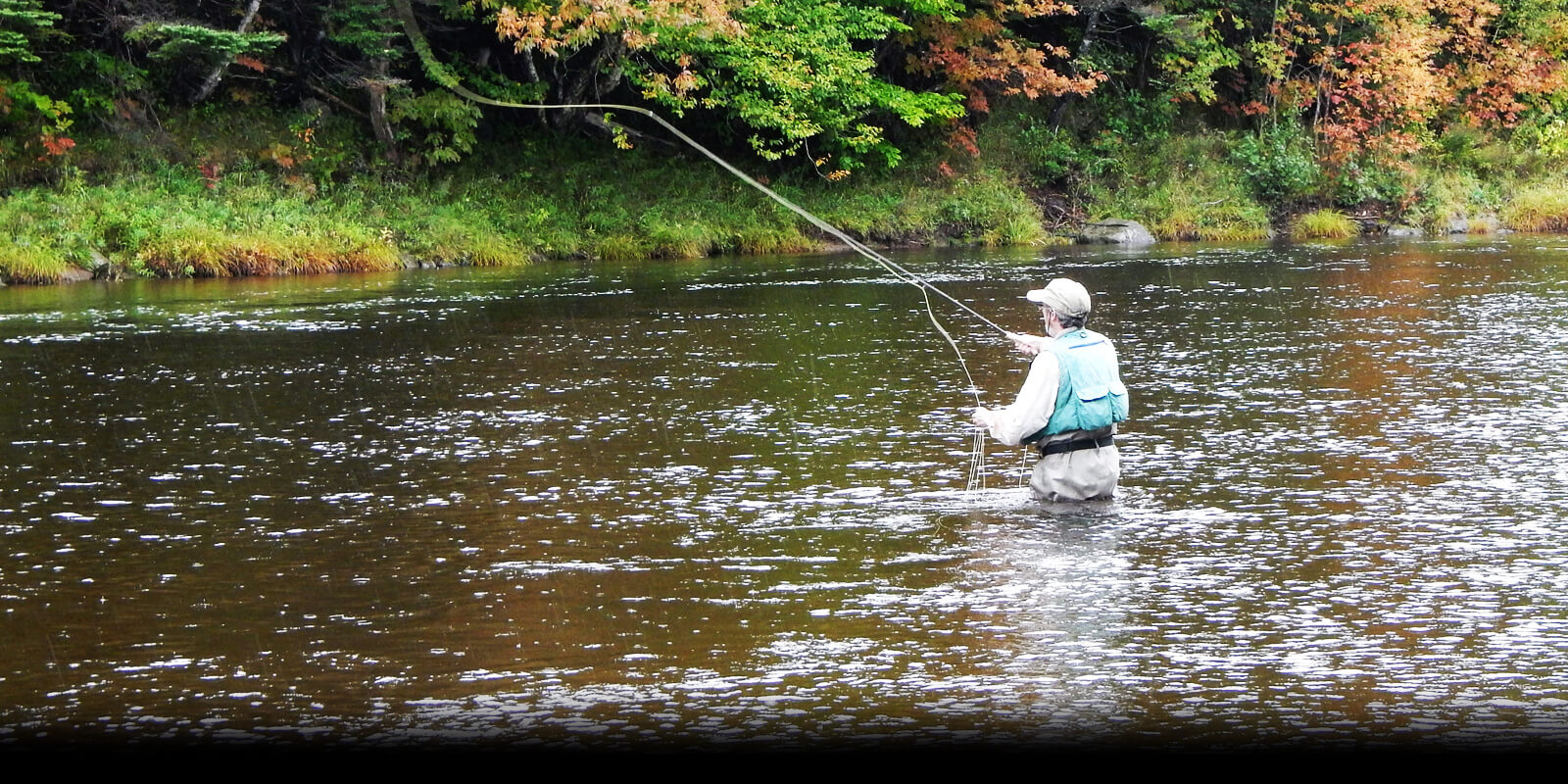 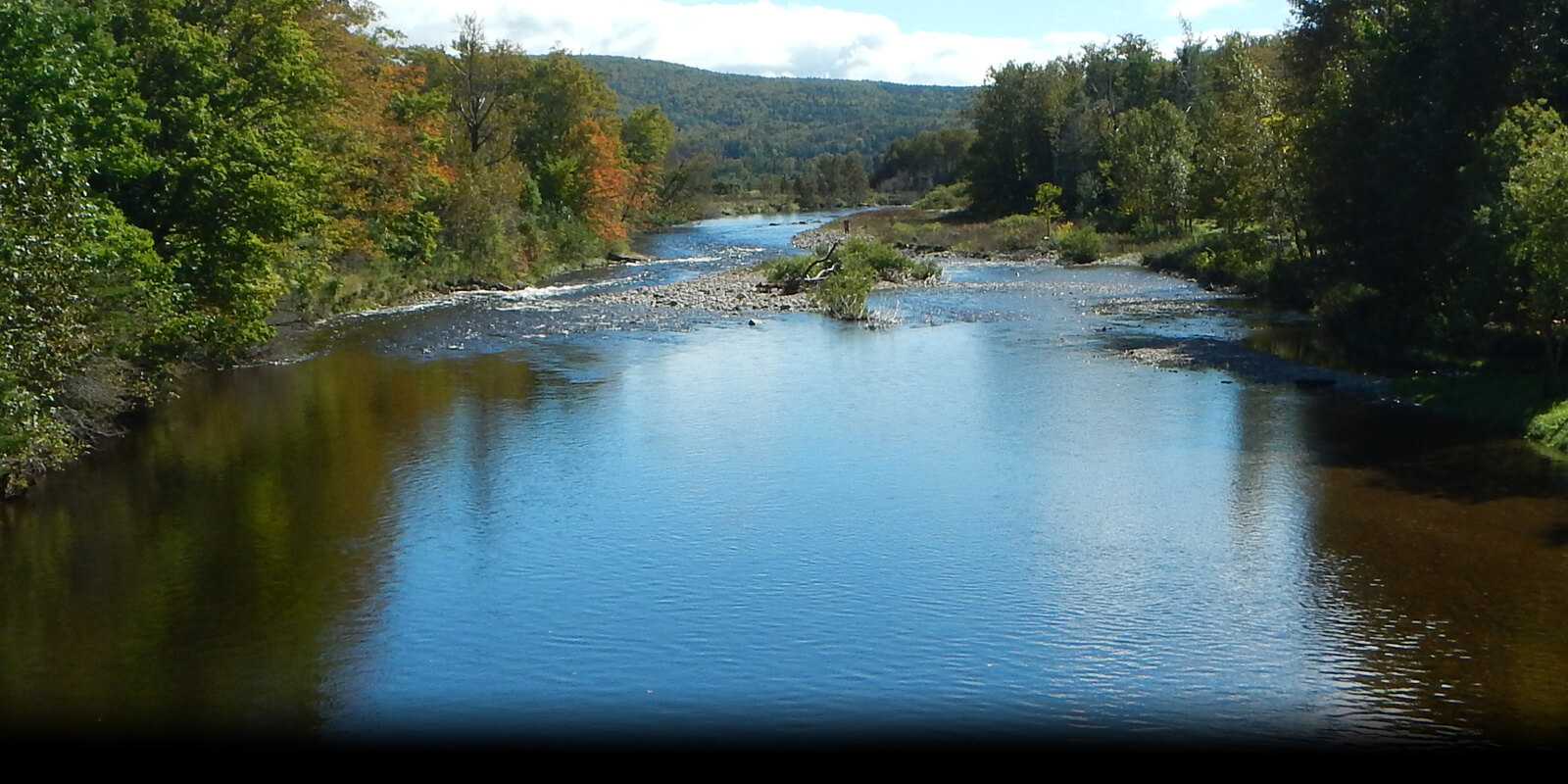 McNamee, New Brunswick, Canada: in the Miramichi River Valley. This location is very close to the state of Maine, only 100 miles from the US border

There are many ways to get to the Lodge, and different lengths of stay can be accommodated, they are very flexible.

There has been a Lodge in this area, run by the Wilson family, since the 1850s! Though the fishing and hunting seasons are limited, the Lodge is open year-round and often serves as a corporate retreat or conference centre. The cabins and lodge are situated on the banks of the Miramichi River at “Big Murphy”, in a way that ensures the utmost privacy and comfort during your stay . The view is spectacular. There are two beautiful and authentic Miramichi-style fishing cottages designed with comfort in mind, with all the necessary amenities , such as bottled water coolers , clean and efficient electric heat , air conditioning and all top-quality bedding and linens.

The Lodge provides daily housekeeping service to keep your place clean and tidy, helping to keep your mind on the more important things, such as tying the perfect fly, or maybe a much needed rest between fishing cycles. There’s a gear shop on site, and a seminar provided regularly on ‘How To Smoke a Salmon’. These accommodations have been awarded a FOUR STAR grade from the New Brunswick grading authority, they undergo an annual inspection to ensure compliance with strict government codes. In recent years the Lodge has become Orvis endorsed, which will lead to even more facilities and amenities becoming available.

The “Murphy Camp” is the larger of the two cabins, with a fully equipped kitchen , living room , two baths, four bedrooms and over 75 feet of spacious screened-in deck . This unit has a total of six beds, four twins and two doubles. You have the option of cooking your own meals, but most people can’t resist the temptation of chef Wendy’s fabulous meals in our dining lounge at the main lodge [which often include the famous local delicacy, Fiddlehead Soup!]. The “Schiffman Camp” cabin has a large living room , two bedrooms and two bathrooms , and an attractive screened-in porch. The bedrooms have two double beds in each, sleeping a total of four anglers, or four couples. There is plenty of room!