The origins of the Margaree River come from two distinct sources. The northeast branch of the river derives from the watershed of the Cape Breton Highlands, while the Southwest Margaree flows northeast from Lake Ainslie. The two branches join at Margaree Forks. The gravel bars of the upper Northeast Margaree provide spawning grounds for Atlantic salmon and their reason for entering the river. The river then flows north to empty into the Gulf of Saint Lawrence at Margaree Harbour, Nova Scotia. The river is 120 km in length and drains an area of 1,375 km. The Margaree has been well known for a century for its quality salmon fishing, with the Nova Scotia Government regulating and managing the river so that it is now restricted to fly-fishing only, with barbless hooks, in the main stem of the river.

The river valley is a mix of farm and woodland; the scenery and topography of each pool are diverse, as are the pools themselves. The Margaree is a free flowing river, its banks were settled more than 200 years ago. The valleys inhabitants have been working the land around the river for as long as they have created a strong connection and sense of stewardship between the people of the Margaree Valley and the river. While the forces of nature are constantly reshaping both the river and its salmon pools, many of the pools have remained as they were for much of the past 100 years. Our favorite stretch of water on the river is the Seal, Lower Tomkins and Tidal Pools, although the Wash and Madbrook pools, especially in the late fall, are exceptionally beautiful and often very productive.

There are a couple things about fishing the Margaree River that every angler should know before coming to fish this wonderful body of water. This is a public water system, meaning that there will be anglers fishing pools both before and after you have fished it. There are a series of strategically located benches on many of the pools for anglers to sit, observe and chat, while waiting their turn to fish the pool. Without question, this is the most civilized public water we have ever fished, everyone on the river is very respectful of the rules and fairness which makes the Margaree such a unique and special place. Your guides for the trip know all the customs and ” unwritten rules ” of the water, the true essence of the river seems to be a spirit of cooperation and fairness that is unrivaled. The cast of characters that we have met over the years while waiting to fish pools on the Margaree could fill a book, as could the remarkable quality of the ” river intel ” that other anglers are graciously willing to pass on.

There are few rivers in Eastern Canada where the possibility of landing a truly giant salmon exist that are better than the Margaree. A 20+ plus fish is relatively common and 30 to 35 pound salmon are landed on a regular basis during the summer and fall runs. To drive this point home, the largest salmon caught on a rod and reel in Nova Scotia, a 52.5 pound monster, was taken from the Margaree River.

The Margaree is a truly beautiful river with an almost tangible mystical quality to it and there are few places we would rather fish for salmon, particularly if we are looking to land big salmon.

Guest will fly to the Sydney Nova Scotia International Airport where they will be met outside the airport by our shuttle driver for the ride down to Margaree and the Normaway Inn. The drive from the airport to the Normaway is roughly 1 hour and 45 minutes. Another alternative to flying into Sydney, although certainly less desirable, is to fly into and out of Halifax, Nova Scotia. The drive from the Halifax Airport up to Margaree is considerable and takes on average about 6 hours in total, each way. 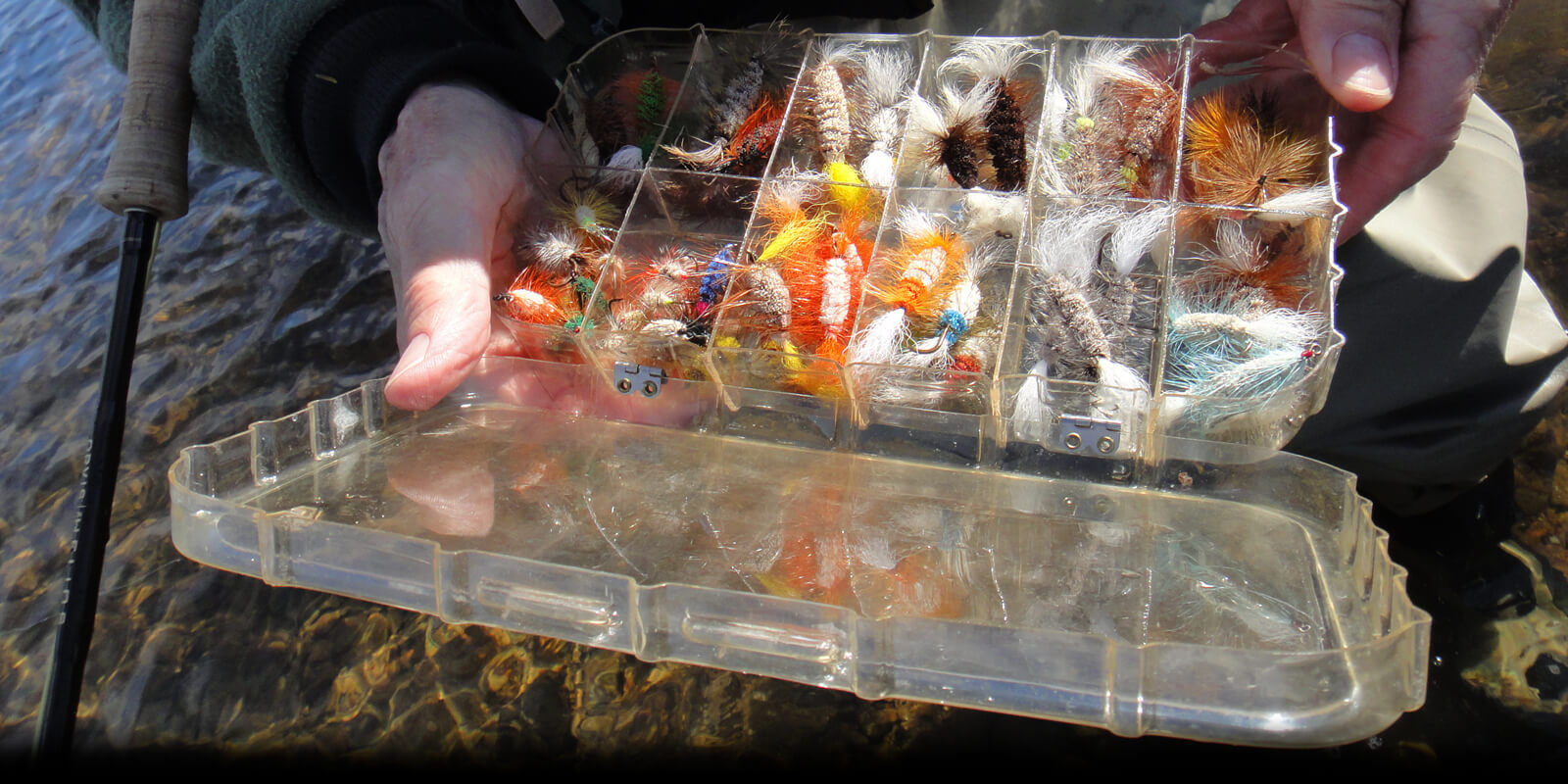 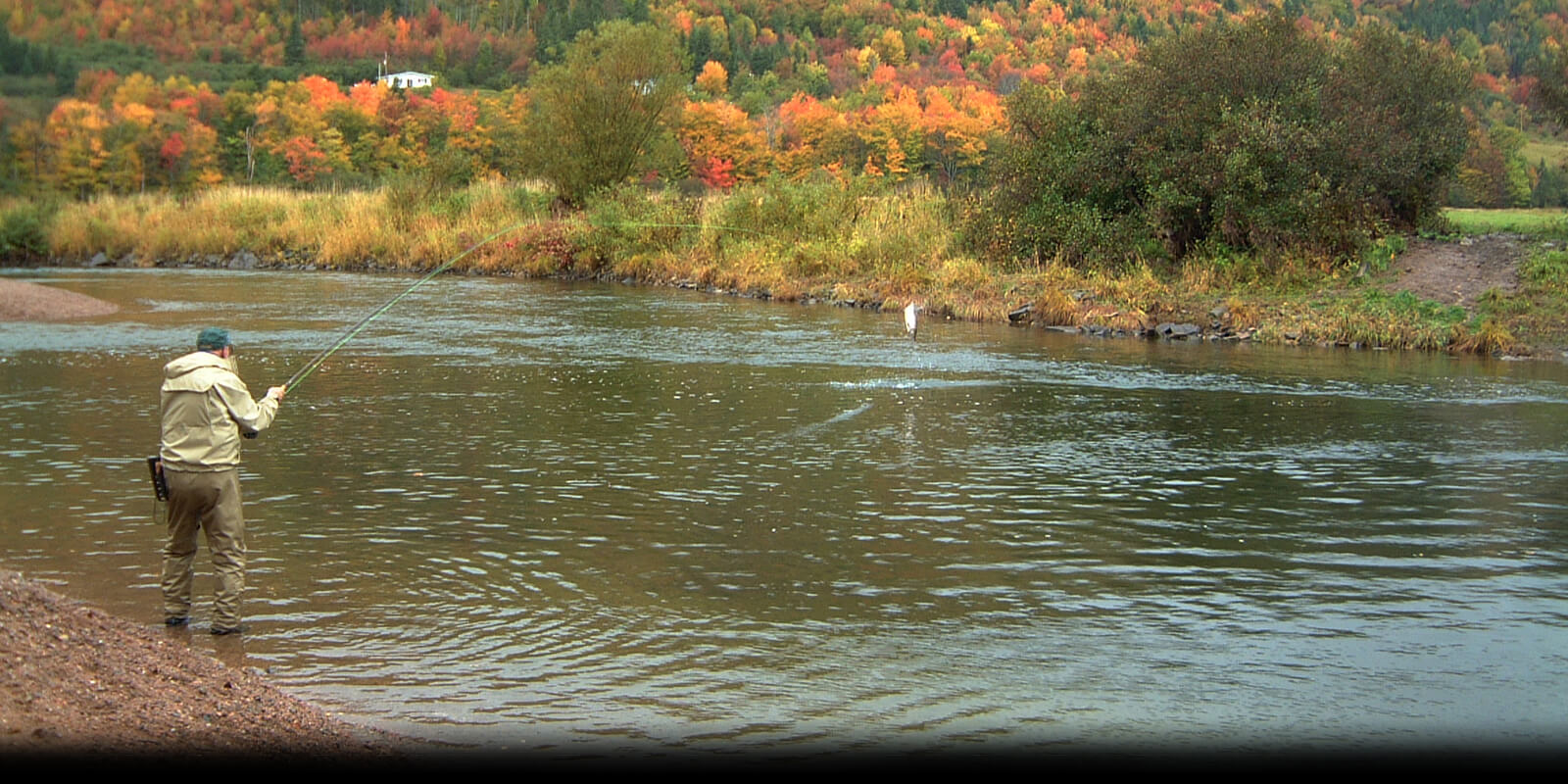 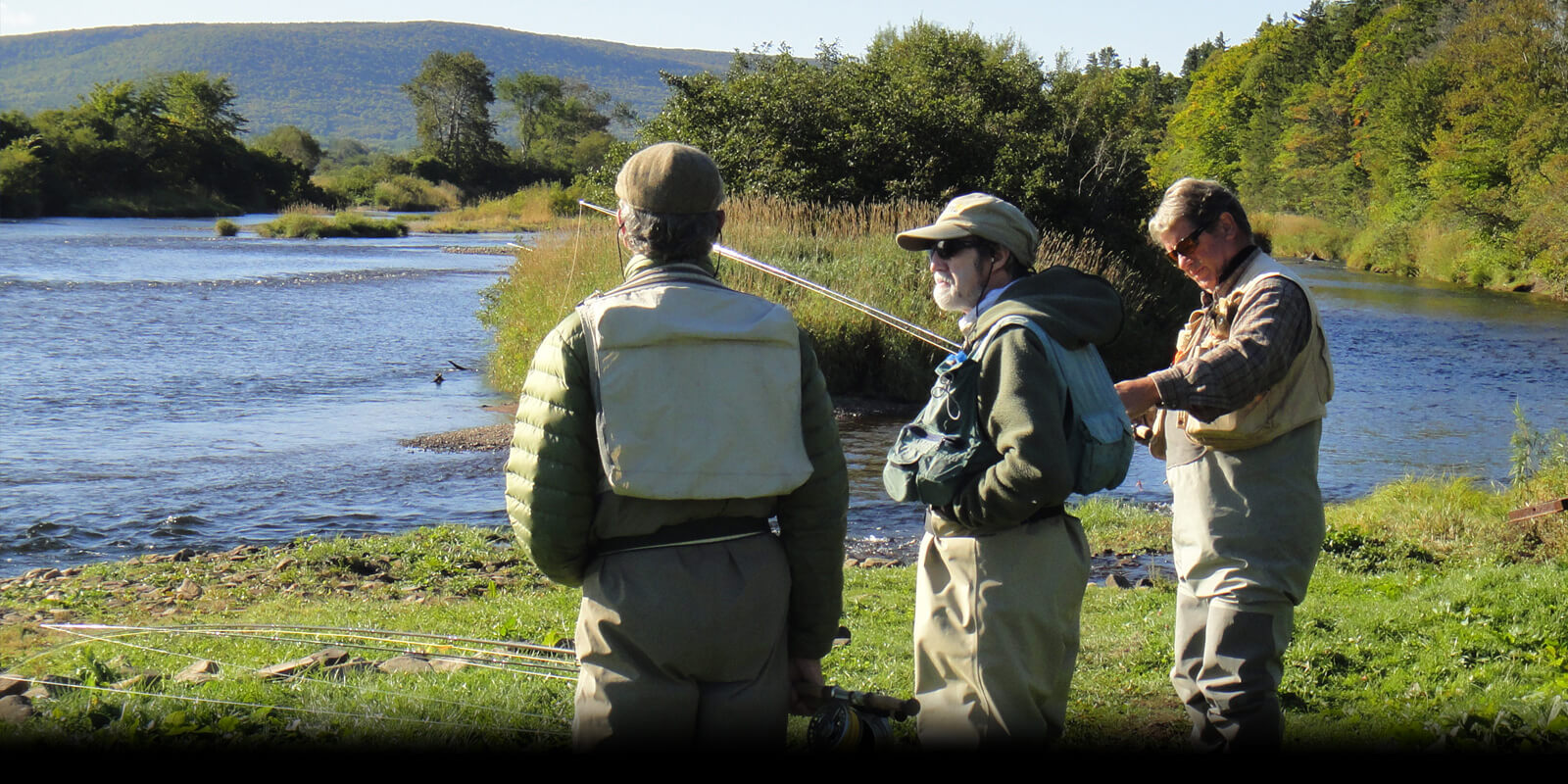 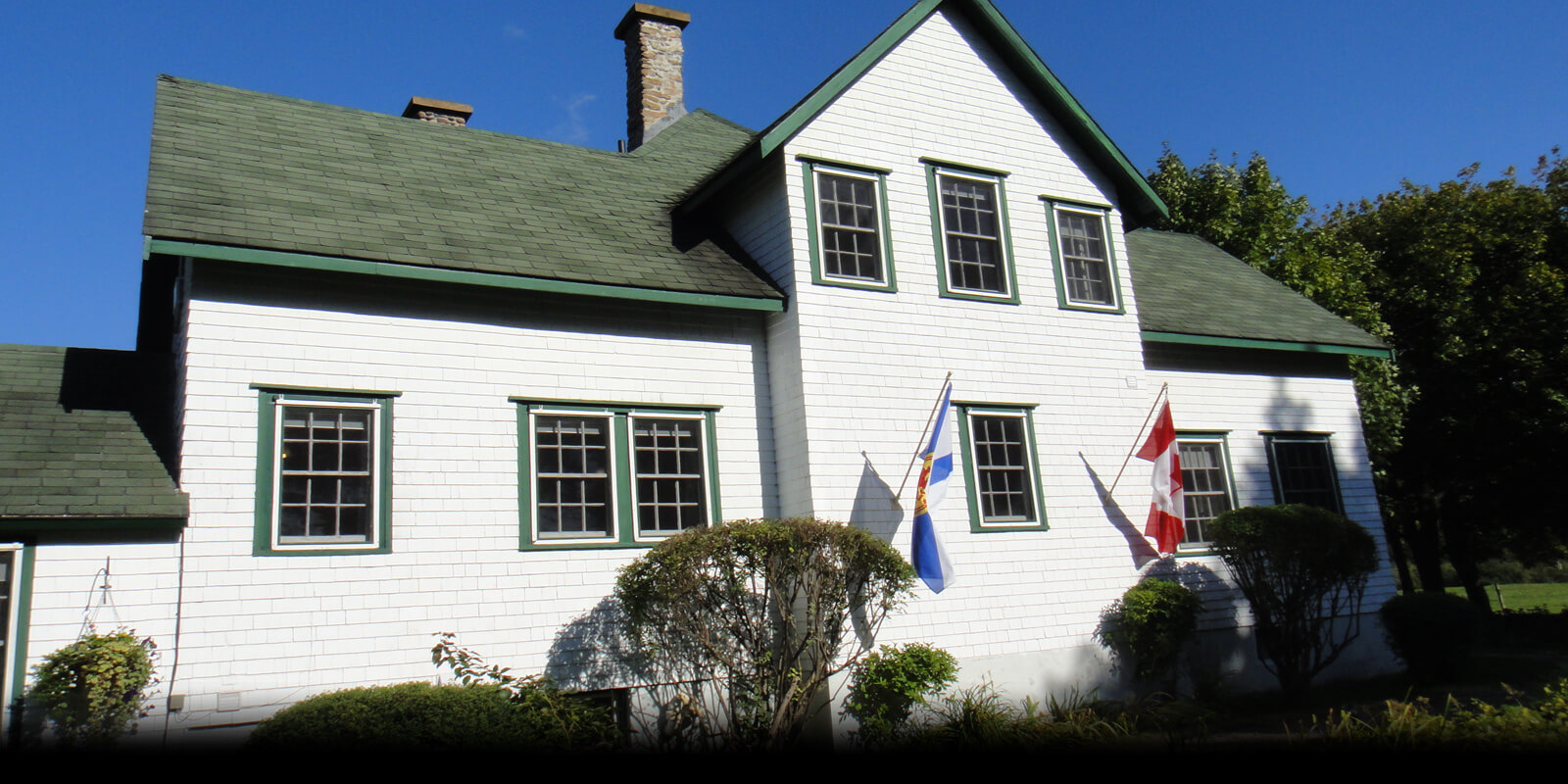 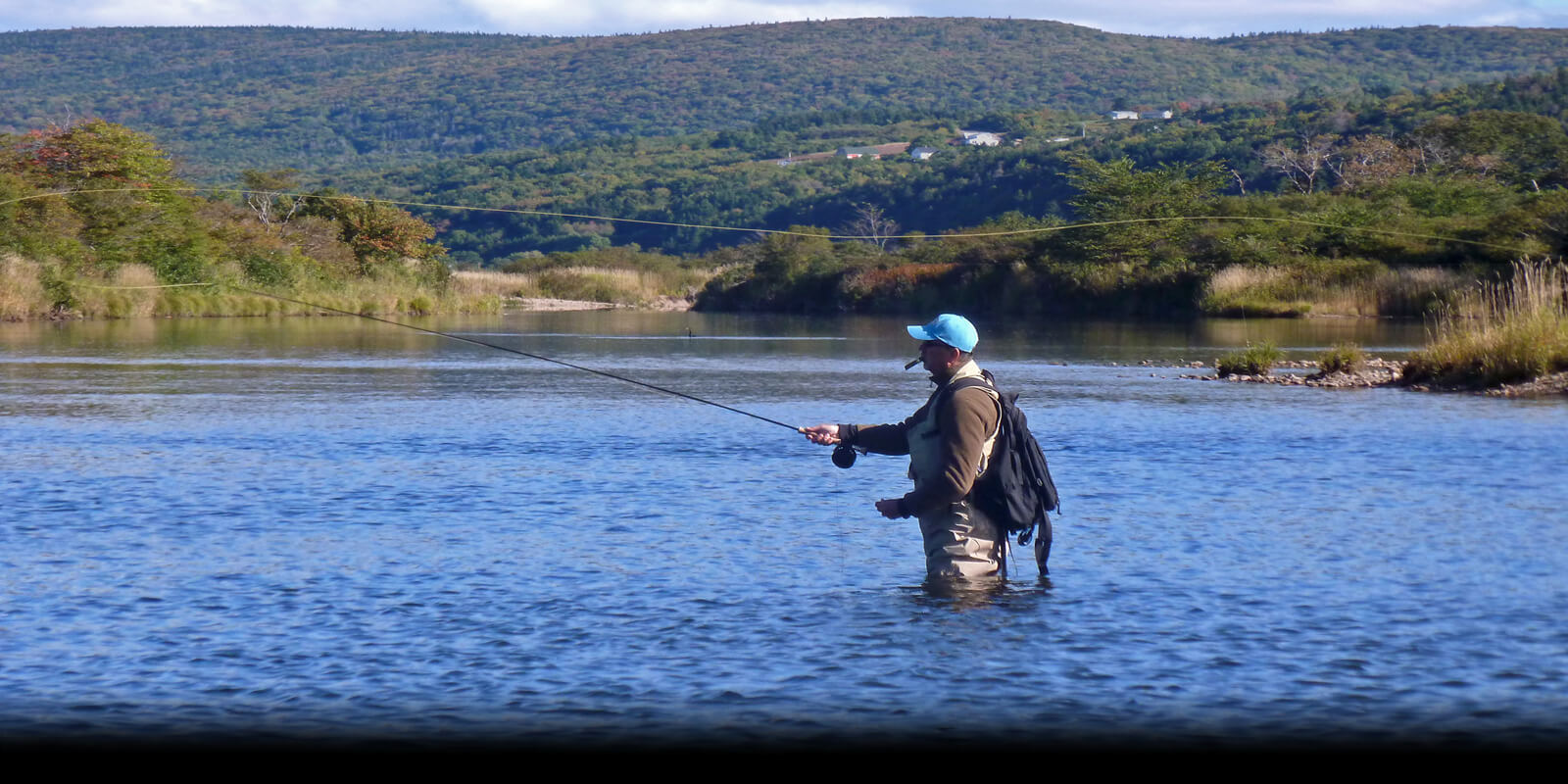 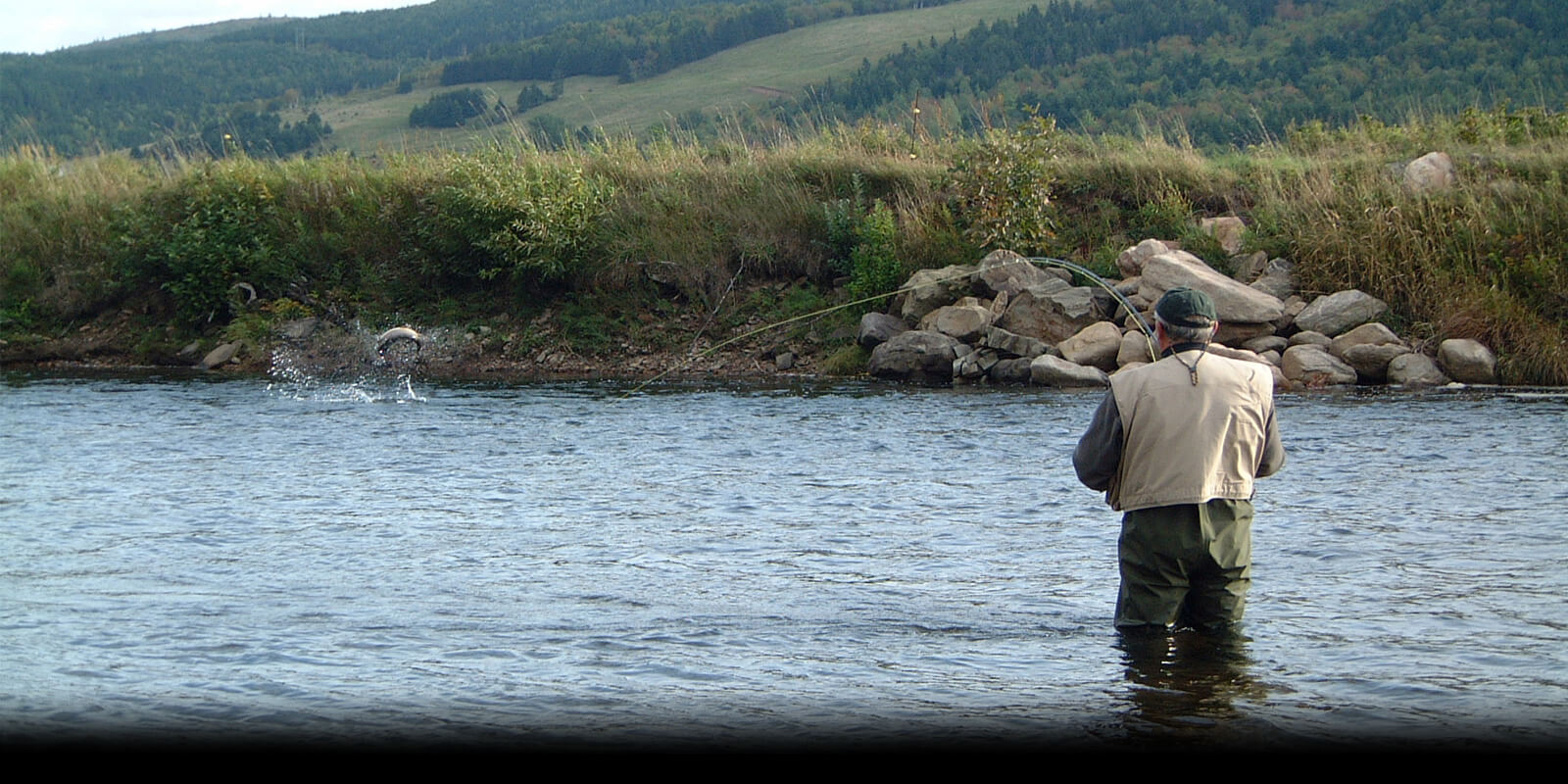 The Margaree River is located in Cape Breton, Nova Scotia.

As long as there is guide availability, guests can arrive and depart to fit their schedule.

When fishing the Margaree, we stay at the Normaway Inn. Without question this one of our all time favorite places to stay and fish from, the warm friendly environment makes this an excellent place to stay, particularly in the fall, when the temperatures are starting to drop. The Normaway is a beautiful old traditional inn that can only be found in places like Cape Breton.

The owner Dave is a friend of ours and he is on site daily to attend to guests and make sure that everything is running smoothly. The inn is cozy and well lit, with a wonderful living room centered by a fireplace that often doubles as a music room for local fiddlers who play for guests after dinner. The dining room is cheery and bright, with an excellent kitchen that produces a wide range of delicious 4 and 5 course meals. The rooms on the second and third floor of the inn are really nice, with antique furnishings and big comfortable beds. Each room has its own private bath with hot and cold water.