May through July – The Flats
The striped bass fishery on Long Island, New York has made an incredible comeback, due largely to the cleansing of the Hudson River, one of the primary spawning grounds for the Striper. Tighter controls on the commercial harvest of the striped bass as well as those of recreational fishermen have also played a part in the burgeoning population of the striped bass. Stripers are the first to show in Long Island’s waters in early spring and the last to leave, some fish lingering into late December as they fatten up on the shoals of Menhaden and then large Herring that choke the waters at that time of year. In spring and early summer, Stripers are king of their domain, they warily stalk the flats in search of a wide variety of prey items. Swimming style plugs and finesse style rubber jigs are the norm for spin tackle, as are flies which imitate sand eels and/or spearing. Bass can also be caught on juvenile flounder and crab flies, further proof of their omnivorous diets.

Starting in early May and continuing thru July guests will sight fish to stripers cruising the beautiful clear shallows of both Peconic and Gardiners Bay, located roughly seventy miles east of New York City. Using traditional flats skiffs, more commonly associated with the Bahamas or the Keys, guests can expect to stalk hungry spring stripers who have left the Hudson River and Chesapeake Bay a month before on their annual migration to New England. Beginning the first week of May, flats anglers encounter schools of stripers in the 24”-26” range along with numerous fish in the keeper size (28” in New York). On many days, especially early in the season, shots at larger fish, some exceeding 20lbs are not uncommon. 7 and 8 weight rods, intermediate and floating lines ending with 12’ leaders are the tackle of choice. Sand eel and silverside patterns are the first choice for flies but stripers fall to a variety of patterns including crabs and baby flounder. Anglers who have bone fished before will find lots of similarities. Speed and accuracy of casting many times are more important than distance.

As the waters warm up in Peconic Bay in early June, the quality fishing moves a little east, to Gardiners Bay, thru the end of July. Towards the middle of summer, as the temperature levels exceed the tolerances of the flats feeders, guests can anticipate a switch to the false albacore. The false albacore or “Little Tunny” as it has been affectionately called, is all about speed! It has a torpedo shaped body, pockets which it can tuck its fins into and a sickle shaped tail that propels the fish forward toward its unsuspecting prey. On average, false albacore found in Gardiners Bay, East Hampton or Block Island Sound, Montauk weigh in around 6-12 lbs. They are capable of heart stopping runs, which repeatedly take fly anglers deep into their backing. Spin fishermen of late have been very successful taking Albacore on small, metallic jigs, while fly fishermen employ 2-3” long epoxy flies which perfectly mimic the Bay Anchovies which are so prevalent in the water at that time.

Labor Day through November – The Montauk Blitz
Montauk is located at the far eastern end of Long Islands South Fork. It is about 125 miles east of New York City and is still New York State’s largest commercial fishing port. This region is known as one of the sport fishing capitals of the world. It is home to over 25 current world records. The waters of Long Island Sound flow into the Atlantic Ocean at Montauk and bring in vast amounts of bait and nutrients. This attracts great schools of Striped Bass, Bluefish and Fluke. September through November signifies the annual fall migration.

As the surrounding waters begin to cool down, bluefish, false albacore and striped bass feed with abandon on the myriad of baits that are being flushed out of the bays and estuaries. Montauk, at the most eastern tip of Long Island’s South Fork, becomes center stage for the fall run. The fabled Northeast grand slam may be attained time after time during this period as the concentrations of fish are at their peak! Montauk’s striped bass will weigh anywhere between 10 to 50 pounds while the average fish will weigh between 15 and 20 pounds. Fish up to 70 pound bass will be caught occasionally during the fall fishing season. The bass, bonito, false albacore and the bluefish are all around this magnificent fishery during the fall run with surface feeding by all four species occurring almost daily during the fall. Plenty of big bass still fall to anglers who use sinking lines to get their flies down below the surface chaos.

Dependent on water temperature, the albies will stay to mid or late October when they leave for warmer waters. Bay anchovy fly patterns are the order of the day for these line burners. Come early November the guides eagerly anticipate the herring arrival, ensuring that guests can continue to cast to schools of large bass busting the surface as they ravage these 10” baits. Our guides at Sag Harbor and Montauk are comfortable with both fly and spin.

September through November
23’ Parker Center Consoles Special Edition powered by Yamaha/Suzuki/Mercury 4 stroke 225 horse powered engines. Because of the rougher conditions found when fishing Montauk in the fall, these deep V hulls are perfect.

Located 100 miles east of New York City on the East End of Long Island. The total driving time is approximately 2 hours. Guests can either rent a car or we can arrange to have a town car pick you up from either Manhattan or JFK. Helicopter charter service can also be provided.

Located 125 miles east of New York City on the eastern tip of Long Island. The total driving time is approximately 2.5 hours. Guests can either rent a car or we can arrange to have a town car pick you up from either Manhattan or JFK. Helicopter charter service can also be provided. 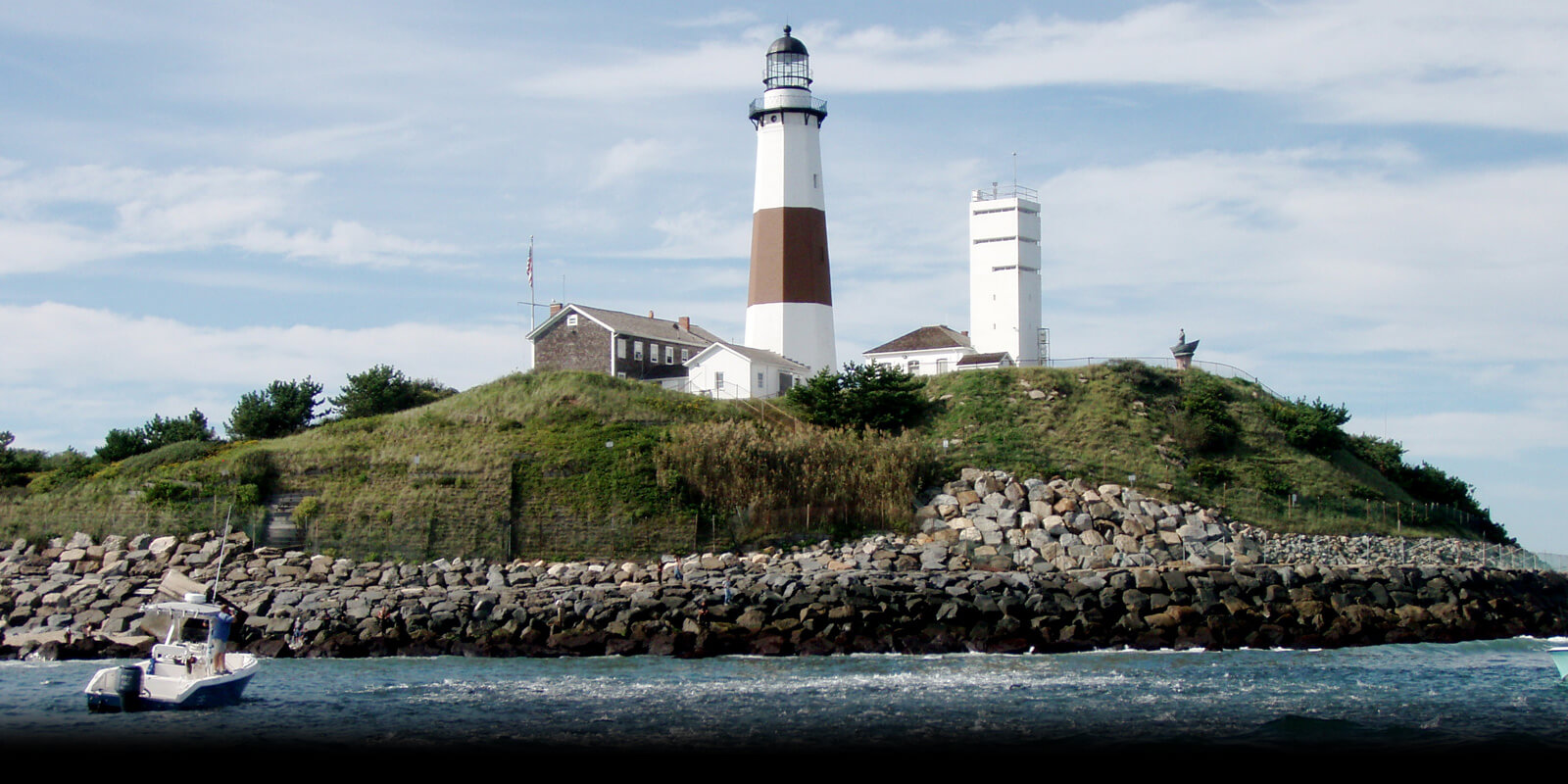 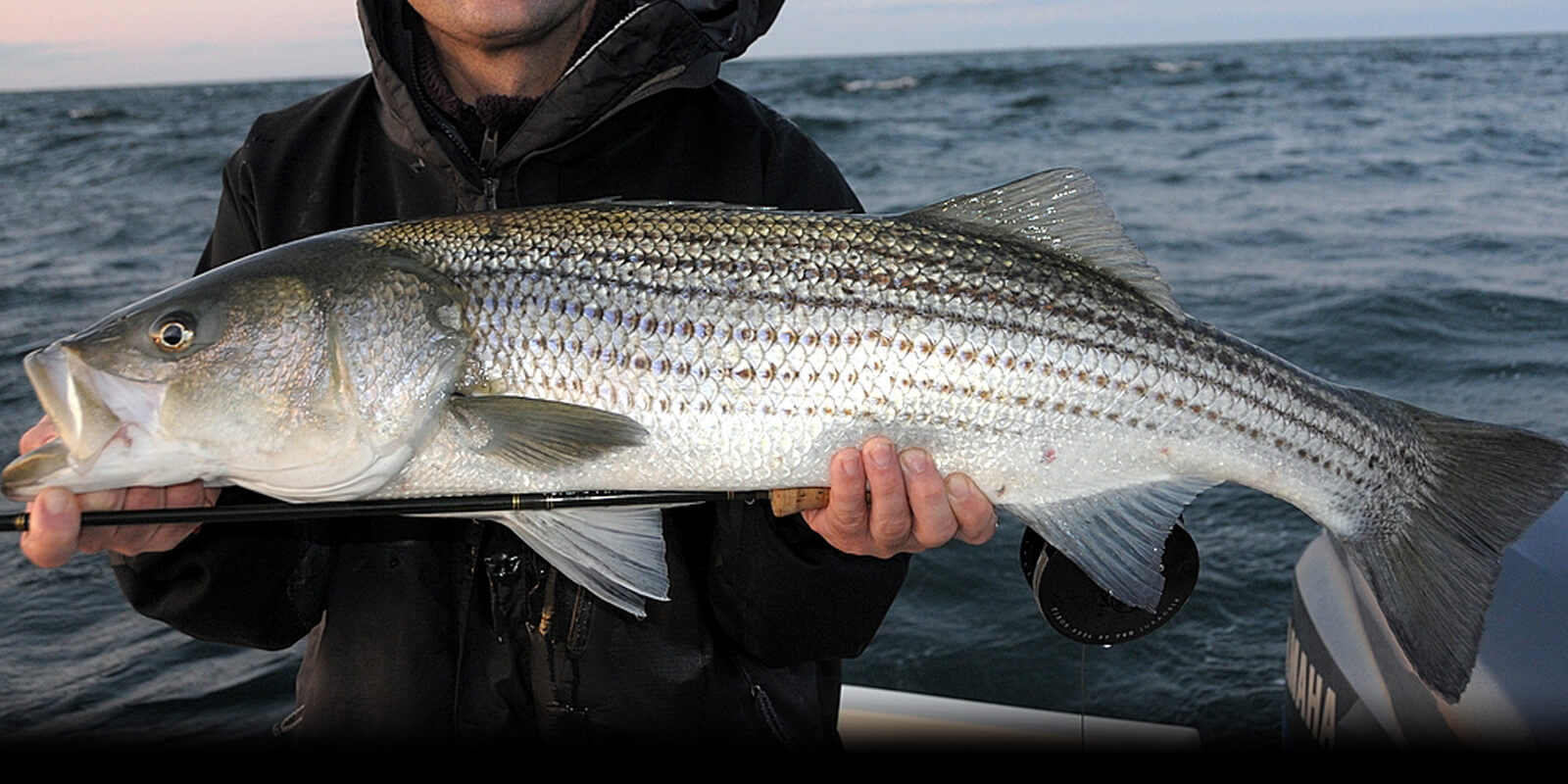 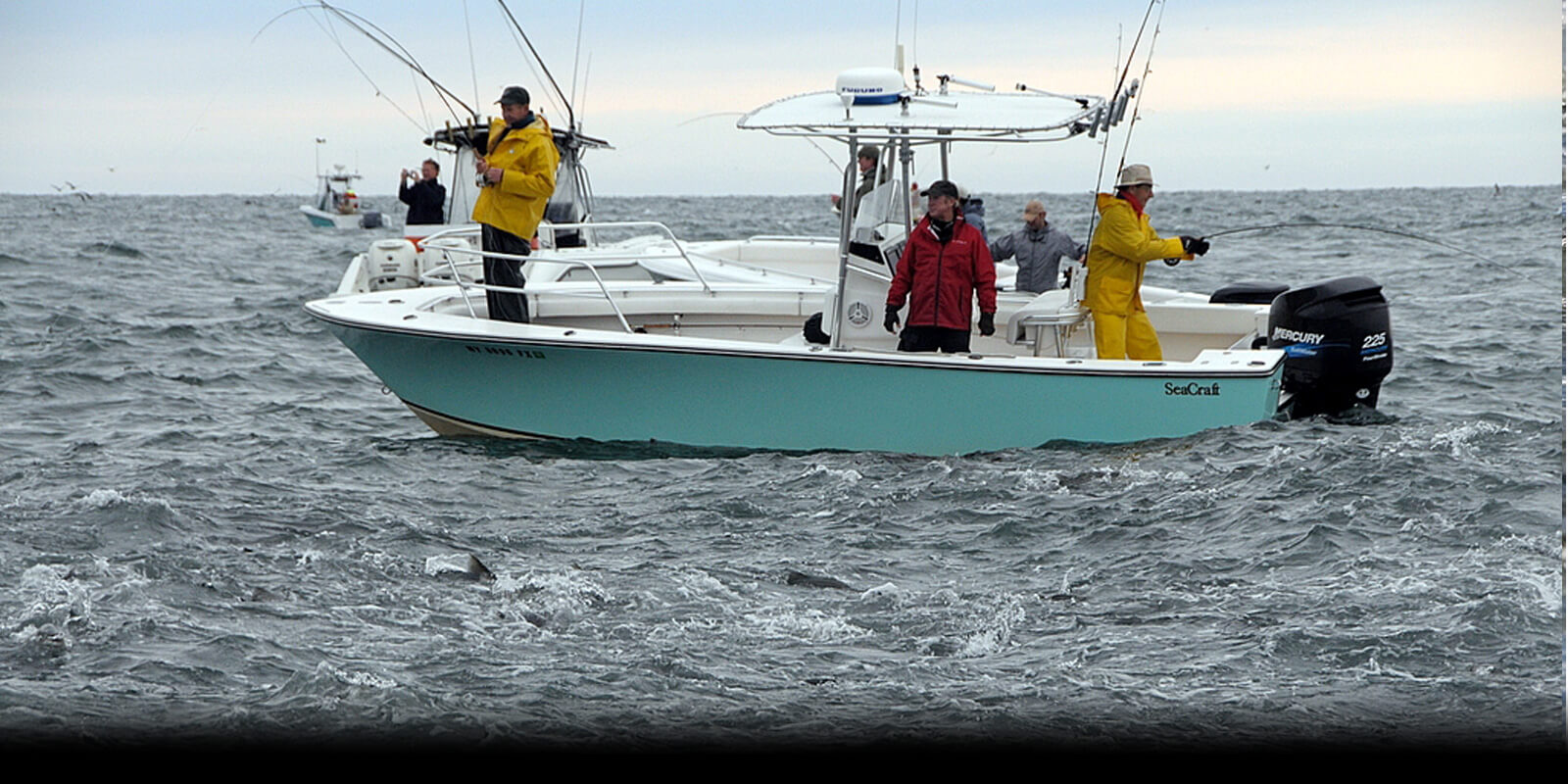 May through July: Sight fishing in the Shallows of Peconic and Gardiners Bays

There are no set arrival and departure logistics for this trip.

May through July The American Hotel is one of historic Sag Harbor’s landmark buildings. It was built in 1846 at the height of the Whaling era and 160 years later, the hotel is still regarded by locals and visitors as one of the most elegant, charming and professionally run establishments on the East End of Long Island. The intimate character of the hotel shines through in each of the eight superbly appointed guest rooms. The emphasis at the hotel is on ensuring the comfort and pleasure of every guest during your stay. As a small boutique hotel, there is a strong emphasis from the staff on providing a true personal touch at every opportunity. Located right on Main Street, in the heart of Sag Harbor, The American Hotel is just a stones throw from the many restaurants and drinking establishments that make Sag Harbor such a unique and friendly place to stay. If guests feel like staying close, the hotels superb award winning restaurant will please even the most discerning palate. The restaurants wine cellar is one of the finest in North America.

September through November Guests stay at The Montauk Yacht Club Resort & Marina. This well known resort is a favorite of the Manhattanites looking to get away for the weekend and is located in the hamlet of Montauk, part of the Town of East Hampton, New York, on the South Fork of Long Island. The newly renovated historic property is the ideal destination for anglers looking to hit the fall striper blitzes. The rooms are fantastic, with king or double/double beds with beach views, appointed with luxurious residential style accents: balcony, new furniture, 37 LCD HD flat panel televisions and custom designed nautical window treatments as well as a new bedding package with goose down pillows, duvet comforters and 300-thread count sheets. Modern accessories include coffee makers, clock radios, refrigerator and voicemail. There are several restaurants at the resort, which run from formal dining to a relaxed tavern atmosphere. Our favorite choice is always Hurricane Alley, which can be described as a laid-back indoor/outdoor dining atmosphere reminiscent of a time-honored

NOT INCLUDED IN PRICE - Sage Harbor

Canadian, British, EU and Australian citizens only need a valid passport for entry to the United States. No visa is required.