The expanse of flats that lies to the north and west of Freeport is vast (85 miles long) and productive, and Pelican Bay is one of the few operations with a license to fish this water. The bonefish here eat eagerly, almost to the point of being reckless. Careful presentations are nearly always met with a voracious take, but even fish that are “lined,” though they may initially dart a short distance away, usually wheel around to see what caused the disturbance and search frantically until they locate the fly. In addition to being particularly unwary, the fish here are also abundant. Most notable, however, is the average size of these bones which, we can say with confidence, is 5 pounds. Many fish in the 5- to 8-pound range are caught and even double-digit bones are lurking around these flats. And, as if trophy bone-fishing like this weren’t enough, this region has also shown itself as a developing permit fishery with multiple permit releases. Permit are of the typically large Bahamas variety, averaging over 20 pounds.

Offshore fishing is a great way to break up a week of flats fishing, and April through October offers excellent offshore fishing around Grand Bahama. The primary target will be the yellow fin tuna, considered by many to be one of the strongest game fish to pursue. Having spent over 100 hours last spring/summer on the tuna grounds and refining the program, manager Greg Vincent at Pelican Bay has now secured a brand new fully-rigged 26 – foot Pursuit. This boat is ideal for two to three, but can also be used for just a single angler. The yellow fin average around 25 pounds, with fish over 60 pounds landed! There are also possibilities of mahi- mahi, as well as blackfin tuna. Each fishing day, you will be met by your guide directly in front of the hotel lobby and driven to Hawksbill Creek, which is located on the Northern side of the island, or one of the other three launch sites around the island. The best spot will be chosen depending upon the weather. There are large canals on each side of Freeport which will allow you to take a boat across the island. However, by driving a short 20 minutes, you save a lot of time. A really great recent upgrade is that Pelican Bay purchased 16-foot Maverick Mirage flat skiffs with 90 H.P. engines, with which you can cover a lot of territory fast, and in comfort. With these new boats, you can easily fish the entire northern side of the island. The most wonderful part of this whole operation is that you don’t have to look very hard to find fish. The bone-fishing is exceptional with the hotel record an impressive 14 1/2 pounds!

The island of Grand Bahama stretches 90 miles east to west, and the north shore’s vast area of creeks, cays, and flats create hundreds of miles of shallow, fishable shoreline. Bottom structure varies from hard sand and grass flats to harder, light coral and marl flats, all of which provide excellent feeding areas for bonefish and to a lesser degree, permit. The experienced, seasoned guides of Pelican Bay are dedicated to making your fishing adventure both productive and enjoyable, and will tailor each fishing day to your schedule and individual preferences. All of Pelican Bay’s guides have chosen guiding as their year-round profession: it is not just a seasonal job. Anglers can take advantage of the thousands of hours these guys have spent on the flats and feel comfortable in asking for all types of direction and instruction. For anglers new to saltwater flats fishing, Pelican Bay is not only a wonderful place to learn, but a destination that guarantees action your very first time out!

While at Pelican Bay, a large part of each fishing day is spent casting from the Maverick Mirage flats boats. Anglers are also encouraged to wade, during times where large concentrations of fish are found tailing. The bonefish vary greatly in size, from small, two to three-pound fish found in large, easy schools, to “average” Grand Bahamas bonefish in the four to six-pound range. Although Pelican Bay is primarily a world-class bone-fishing destination, there are several other types of game fish that frequent area waters. Permit and tarpon arrive during the spring, and are encountered on a regular basis throughout the fall months. The clubs record for permit caught on fly is 38 pounds. Our largest tarpon to date was estimated at 130 pounds. Large barracuda can be found almost daily, and there is always the possibility of running into roaming schools of hard-fighting horse-eye jacks that average 10 to 15 pounds. Since there are no roads available to access this area of Grand Bahamas, the result is a bone-fishing habitat that sees little angling pressure, aside from the few professional guides who fish these waters with clients. The entire area is pristine!

16’ Maverick Mirage flats skiffs, with 90 HP Yamaha outboards. All boats equipped with VHF radio, cell phone, USCG-rated safety kits, poling platforms and lean posts. The Lodge also owns many trailers, so the boats can be moved to alternate, convenient launch sites. For offshore fishing, the boats are the 33’ GRUNDY WHITE and the 26’ PURSUIT. Fly and spin welcome

Guests will fly into and out of the Freeport, Grand Bahama Island International Airport. Grand Bahama is the easiest flats- fishing destination to get to in the Bahamas, due to the numerous direct daily flights from Miami, West Palm Beach and Ft. Lauderdale to Freeport, Grand Bahama. Other major east coast hubs like Atlanta are now offering direct flights as well. The island of Grand Bahama is serviced by American, Bahamas Air, Continental, and several private charter services. From the airport, a waiting taxi shuttles guests directly to Pelican Bay. 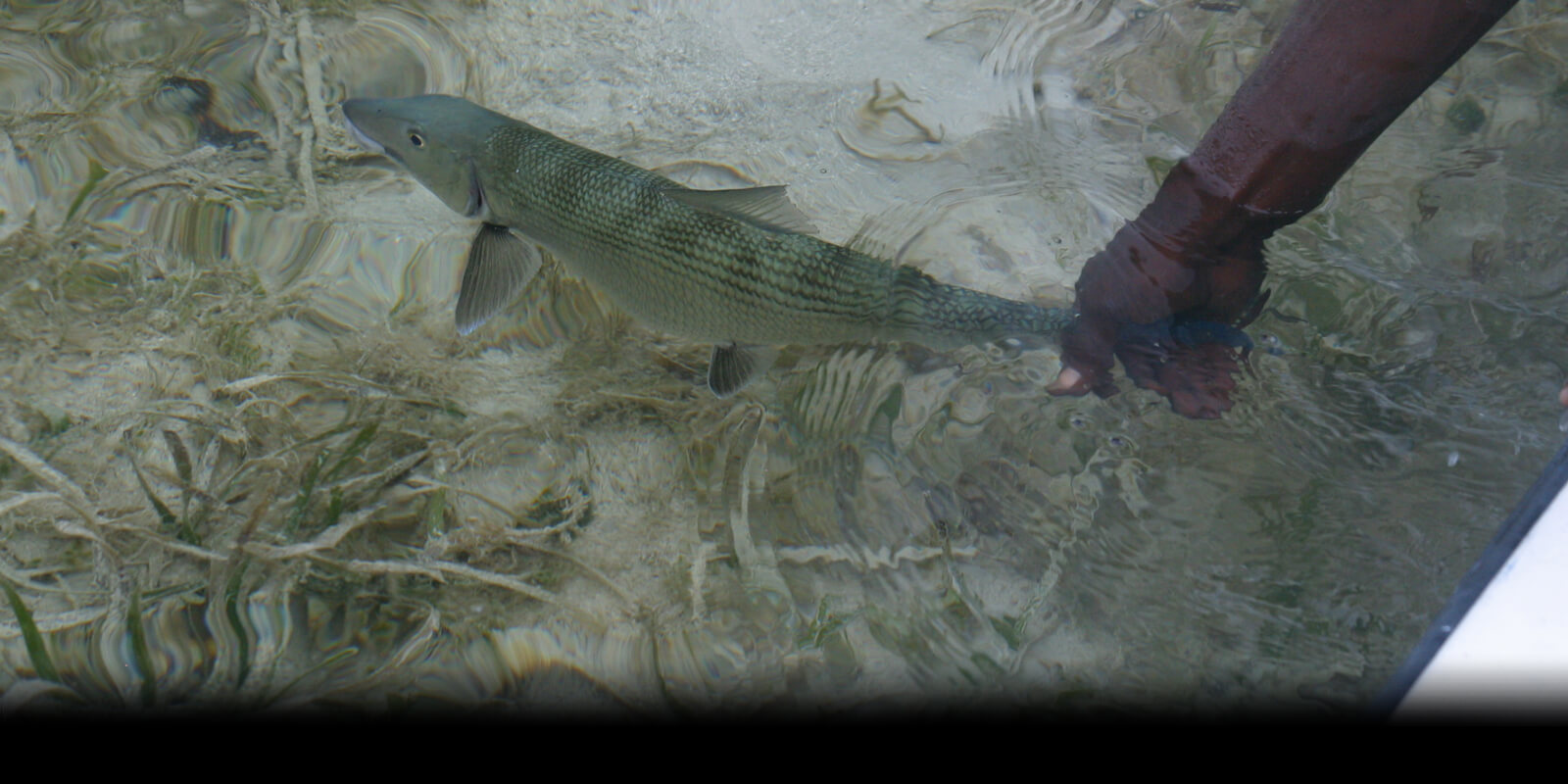 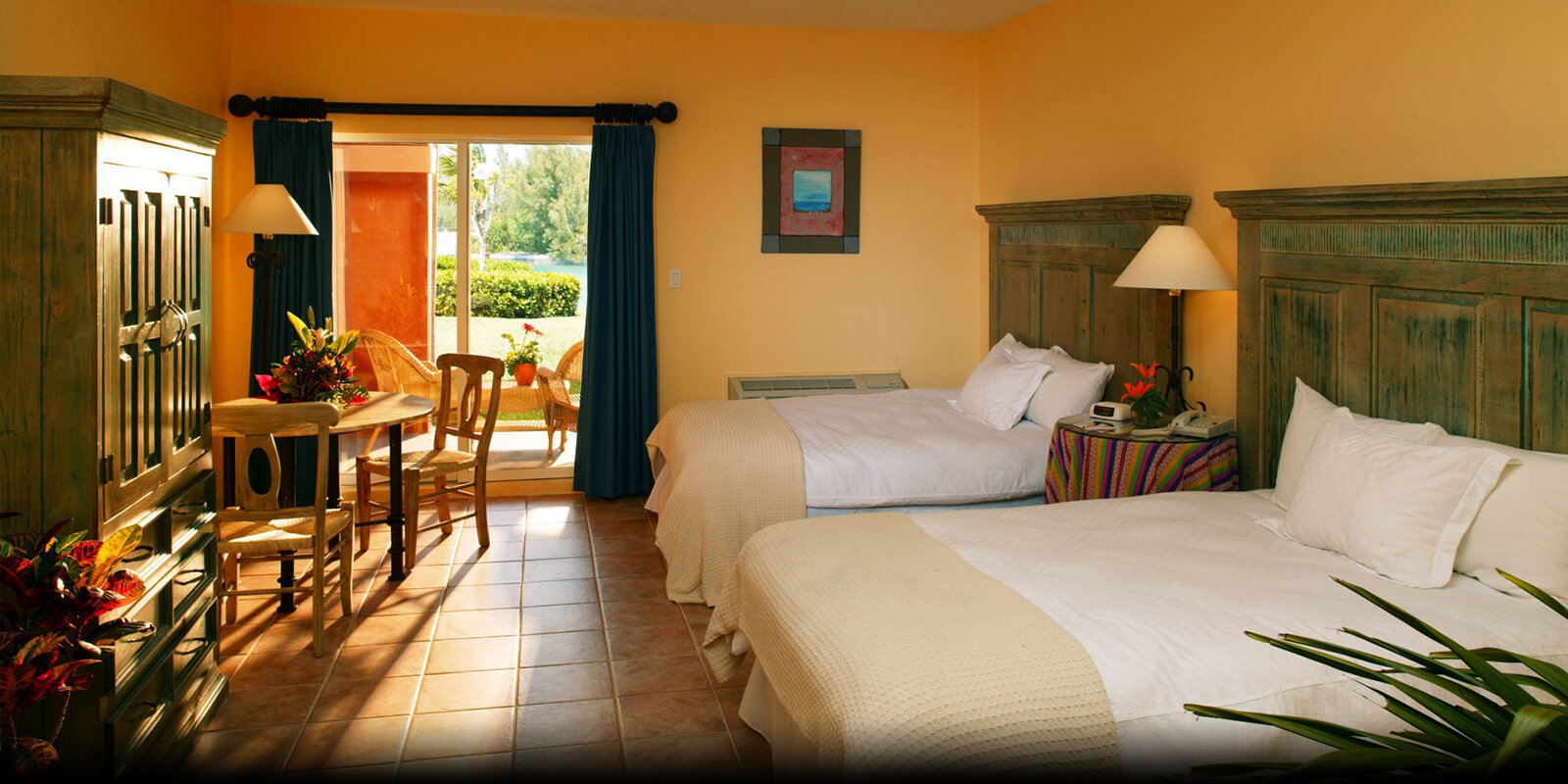 Year-round : October 1/June 30 is peak season. In the ‘summer season’, July 1/Sept 30, rates are somewhat reduced. Offshore fishing is best from May to September.

There are no set arrival and departure days, making this one of the most flexible options in the Bahamas, particularly when considering a short duration stay of 5 days or less.

Properly speaking, Pelican Bay is not really a Lodge, but a luxury Hotel. All rooms are 640 square feet with Italian-tiled floors, shower and tub, and private balconies. Rooms are equipped with two double beds, or one king sized bed. All rooms are fully air- conditioned. All of Pelican Bay’s rooms feature private balconies that overlook the resort’s courtyard area, the marina, and the Port Lucaya Marketplace. These spacious accommodations include king-sized or double beds, satellite TV, direct-dial phones, Italian tiled floors, and a refrigerator. Pelican Bay’s newly-opened single bedroom suites are also available for couples looking for an extra-luxurious “Stay at the Bay.” Newspapers, and freshly baked croissants and breads, are available in the suites each morning, and personal espresso machines and a variety of coffees enable guests to enjoy a private breakfast on the balcony while overlooking the beautiful Bell Channel Bay. Other guest amenities include two tropical freshwater pools, a hot tub, and a great poolside bar. The Ferry House restaurant, adjacent to the hotel, has established a new standard for excellence in fine dining on Grand Bahama. Having worked in some of the world’s finest restaurants, the chefs of the Ferry House have created what they describe as “a blend of contemporary cuisine fused with unique flavors of the Caribbean”. Menus change daily, depending on the availability of fresh, local seafood, fruit, and foreign-quality foods, brought in by air on a regular basis.

While the hotel has 60+ rooms, angling capacity is only 8 rods per week. A 3 night, 2 day fishing trip is the minimum trip package offered.
Bahamas

For American, Canadian and EU members, a valid passport good for 6 months AFTER the trip has been completed is required. Please note that the Bahamian Government is very strict about the 6 month stipulation and they’ve been known to turn anglers away who don’t have sufficient time left on their passport.