Together, Ascension and Espiritu Santo Bays are as close to an angler paradise you will find anywhere. They possess a unique combination of environments which create the ideal habitat for a wide variety of animal and sea life. In essence, it is a great home for game fish. The vast estuary/flats system and adjacent reef are the basis of Casa Blanca’s pristine and highly productive fishery. Shallow water coral species demand a very stable environment with precise water temperature and consistent water depth in order to flourish. This is why large barrier reefs like the Palancar Reef that parallels Casa Blanca’s coast are so rare; Palancar is second only to Australia’s great reef. The reef itself supplies food and shelter to a huge variety of baitfish and small crustaceans which in turn attract larger predators. The reef also protects the shore-side fishery from full ocean swells. The coral heads absorb the brunt of the waves allowing the flats to remain calm even if the reef is being pounded by a storm swell. Speking about Casa Blanca, Lefty Kreh said “Casa Blanca is the best place in the world to catch a Grand Slam, a bonefish, permit & tarpon caught all in one day.” This location thoroughly deserves such high praise. Without question, based on sheer numbers alone, the Casa Blanca fishery is one of the top 3 permit locations in the world. Not only is Ascension Bay home to a large number of permit, there are too many bonefish to even try and estimate. Bonefish ranging from 1 lbs to 8 lbs are caught regularly at Casa Blanca. The tarpon are here all year ‘round. From the back bays and rivers of Ascension Bay to the hidden lakes and lagoons of Laguna Santa Rosa, anglers will encounter excellent numbers of juvenile tarpon cruising shallow water. This is an excellent fishery to hook up, land and release tarpon ranging in size from 10lbs to 60lbs. The spring brings larger, migratory tarpon, some fish in excess of 150lbs.

There is a wide variety of underrated, under fished species in Ascension Bay which will match the skill of the most sophisticated anglers; Barracuda are at the top of the list. They are perhaps the most exciting fish on the flats. They will take a fly or lure; they are big and they fight like hell. In addition to Cuda you will also find Jacks, Shark and Snapper. You should definitely consider pursuing a few of these other exciting species. Casa Blanca is known for its fine “bone” and “permit” fishing, but you can take other species as well. If you would like to go after these other species, the fishing coordinator can give you advice on angling methods, availability, and fly or lure selection. You can fish from a skiff or wade. You can walk, pole, troll, fly-fish, spin or bait cast. You have a lot of options; so, it’s a good idea to discuss your plans with the fishing coordinator. The bays offer the light-tackle saltwater fisherman one of the most diverse selections of game fish in the world. When conditions are right, an angler can cast to bonefish, tarpon, snook, permit, jacks, barracuda, cubera snapper, mutton snapper, sharks, and several different reef species in a single week of fishing. This kind angling opportunity can be found only in a few locations in the world. The guides are very knowledgeable about angling and are comfortable with both fly and spinning techniques. Please keep in mind that not all of them are fluent in English. If you have any problems communicating during the day, speak to the fishing coordinator so he can address the situation immediately.

The Casa Blanca skiffs are 16-foot Dolphin Flats skiffs, powered by Yamaha 40 horse powered engines. There is room for 1 guide and two guests, who sit in tandem bucket seats, which are very comfortable. Rod racks and poling platforms are standard in each skiff.

Guests will need to fly into and out the Cancun International Airport. Upon arriving in the Cancun airport you will be processed by Immigration. You will then claim your baggage. Next you will clear Customs. After customs, proceed to the Arrival Area outside. If you are scheduled to fly to Casa Blanca or Playa Blanca on your day of arrival, the lodge’s local representative will meet you in the Arrival Lobby. The Arrival Lobby will be full of tour operators, arriving passengers and is usually somewhat chaotic. The Casa Blanca or Playa Blanca representative will have a sign printed with “Casa Blanca” and a bonefish. If you do not immediately see him, this means he is transferring other guests to the charter plane and will return shortly. This is a rare occurrence. Do not leave the Arrival Area and attempt to find him. He will find you. The Casa Blanca and Olata Blanca representative will arrange for you and your baggage to be transferred to the General Aviation Terminal by car. The transfer will take less than 5 minutes. You will then board the plane and fly directly to the Casa Blanca airstrip. The flight takes approximately 50 minutes. If more than eight guests arrive in a 2 hour period, the later arriving guests may have a layover of up to two hours in the General Aviation Terminal. The terminal has a very comfortable lounge and small bar which serves drinks and sandwiches.

When you arrive at Casa Blanca, you will land on the lodge’s airstrip, approximately 3 minutes by boat from the main lodge. There is a short walk from the plane to the boat dock, so change into your boat shoes before departing Cancun. Insects can be a problem on the airstrip because it is protected from the wind. Pack your insect repellent where it is handy. Or, when you arrive, walk immediately from the plane to the small pier at the end of the runway where the breeze will alleviate the problem. Your baggage will be transferred by the lodge staff and placed in your room. The boat ride can be wet, so dress accordingly or pack your rain gear on top and put it on before you leave the pier. When you arrive at the Casa Blanca main dock, lodge staff will greet you and show you to your room. Your baggage will arrive a few minutes later. There is no guided fishing on the day you arrive, but feel free to wade the flats around the lodge or fish along the beach. Guests have had very good luck in these areas. On the day you arrive, after dinner, lodge staff will provide a general orientation explaining daily schedules and lodge policies. If you are unsure about some aspect of the coming week, please be sure to ask questions.

Please contact the office for availability and pricing on 5 night 4 day trips. 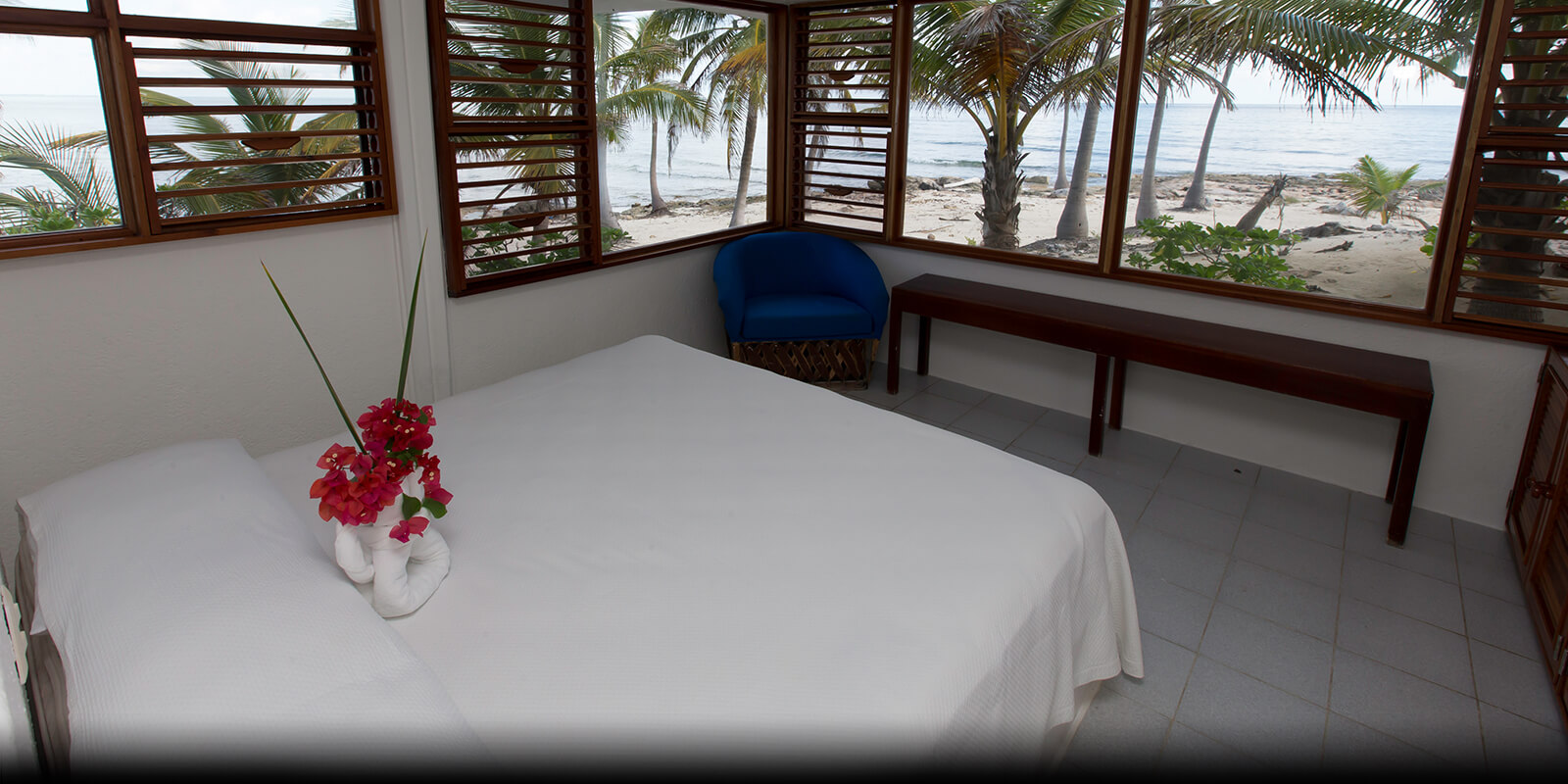 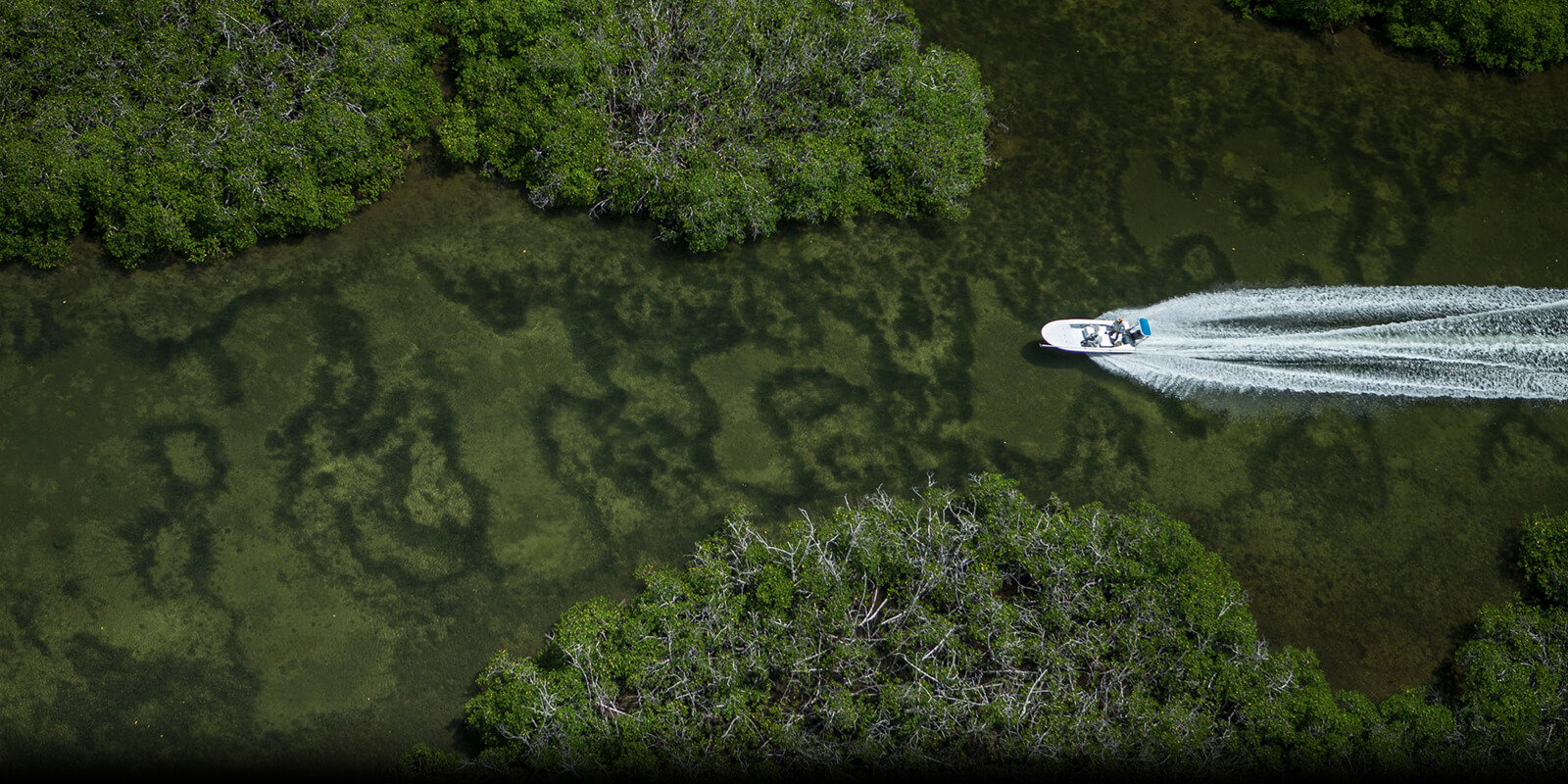 The Lodge sits on the northern tip of a small coastal island in the western Caribbean called Isla Punta Pajaros. Casa Blanca is the only lodge in Ascension Bay. It is as remote and pristine location as you will find in this hemisphere. With the Caribbean Sea only 100 feet away, all rooms at Casa Blanca are seaside. Each room is spacious, well appointed, has remarkable views, air conditioning, tile floors, mahogany shutters and large baths. There are 11 seaside rooms in total spread out on the property. In the main lodge you will find the bar and an extremely accommodating bartender. Margaritas are the house specialty, but only a lucky few, receive a scorpion garnish. Drinks are reasonably priced and guests are welcome to keep an open tab for the week. The house specialty is fresh Caribbean seafood. You will always find the day’s catch simply and skillfully prepared. Garnished with native fruits and vegetables, presented to please your eye as well as your palate. All meals are served in Casa Blanca’s waterfront dining room, at beautifully set tables, by professionally trained staff. This in one of the best run, most comfortable fishing lodges we’ve ever fished.

American, EU and Canadian citizens require a passport valid for at least six months after date of entry, along with a return ticket. You must supply proof of citizenship to obtain a Mexican Tourist Card and to enter the country. The Tourist Card application is issued at the ticket counter by airlines that fly into Mexico. Just fill it out while in flight and present it along with your proof of citizenship to the immigration officials when you arrive in Cancun. For proof of citizenship you can use only a valid passport (check expiration date). The tourist card will be checked at your first point of entry. The immigration official will retain one copy and give you the other, which you must surrender at the airline ticket counter when you check in for your return flight. Keep your copy (Tourist Card) in your possession during your stay in Mexico. No visas or inoculations are required for U.S, Canadian or EU citizens. A Mexican departure tax is payable at the airport when leaving Mexico. Some airlines include this as a prepaid part of your ticket. Please check with us or your travel agent or carrier to verify this.