Without question, the River Suir is one of the premier trout angling rivers in the country. This big river and its highly productive tributaries have very good hatches of flies throughout the season including many species of olives, midges, mayfly, and many different sedges. The River Suir Catchment drains an area in the southeast of the country of approximately 3546 km2. This represents about 4% of the land area of Ireland. The Suir main channel and its tributaries flow mainly through counties Tipperary, Kilkenny and Waterford, though very small pockets of the catchment are within Limerick and Cork. The River Suir rises in the Devils Bit Mountains near Moneygall (North of Templemore) and flows in a southerly direction until meeting the Knockmealdown Mountain range where the river changes its course northwards. Further downstream its course is again altered, where, at Knocklofty, the river turns east passing north of the Comeragh Mountains and continues to flow on through Waterford City until it enters the sea at Waterford Harbour. The river is tidal to a point upstream of Carrick-on-Suir.

The Suir is a paradise for both the trout and the angler. Unlike most rivers, it cannot easily be divided into distinct ecological zones. Almost its entire channel from Templemore down to the estuary at Carrick-on-Suir is a continuous series of shallow and deep ( Less then 2.0m) glides interrupted occasionally by shallow riffles. It increases in width as one proceeds downstream, remaining relatively shallow and maintaining its very good trout carrying capacity over practically its entire length. It has many tributaries, which drain large areas of limestone and these give to the river as a whole, most of the best characteristics of a chalk stream.

Although the trout stocks are in great shape in this part of Ireland, this does not make them easy to catch. They are extremely selective, so fine leaders and small flies are the norm. This is not due to over fishing, it just appears that these have always been very smart fish. If you have fished the South Island of New Zealand, you will have a good handle on what we mean here.

The River Suir was deemed to surpass the celebrated chalk streams the Test and the Itchen by Lord Grey of Fallodon. In his book “Fly Fishing” first published in 1899, he wrote of the River Suir when he fished it in 1880 “in May and in June it might be the finest dry fly fishing in the United Kingdom”. However, the fishing on Irish rivers is challenging. The rivers have abundant fly life therefore making the trout very selective and they often refuse a fly. Lord Grey also wrote “There were trout visibly and audibly rising, which had never seen an artificial dry fly…. They defeated me utterly. I walked and knelt and waded and laboured and perspired under August sun without success.”

Insect hatches on the River Suir are prolific, with good hatches of BWO, sedges, spurwings and many other olives. The hatches have declined in recent years as with most rivers, however during warm balmy evenings the river and its tributaries come alive with trout.

The highlight of the angling season is the “Evening Rise” during the summer months from mid May until the end of August. From about 7pm onwards, the river comes alive with spinner falls and hatches. For example, in the earlier part of the evening anglers can encounter BWO duns, followed by some spinner action, and after that if conditions are right, a sedge hatch. It is a technical river to fish, with lots of slow pools and “slick” water with conflicting currents, making it hard to achieve a long drift. This adds to the mystery and beauty of the river, making the Suir a very intriguing river to fish.

The trout will range from 1-6 pounds with larger fish occasionally caught throughout the season.

4-wheel drive vehicles take guests to the rivers. This is strictly a walk and wade destination.

Guest have the option of flying in through the Dublin International Airport or through Shannon Airport in Cork. Upon arrival and having cleared customs, guests will be met by a driver in the luggage section of the airport. He will have a sign with your name on it and he will then escort you to his car for the two hour drive down to the farmhouse. For groups, we have a series of vans and mini buses that will be utilized depending on the groups size.

Please contact us for single supplement availability and pricing. 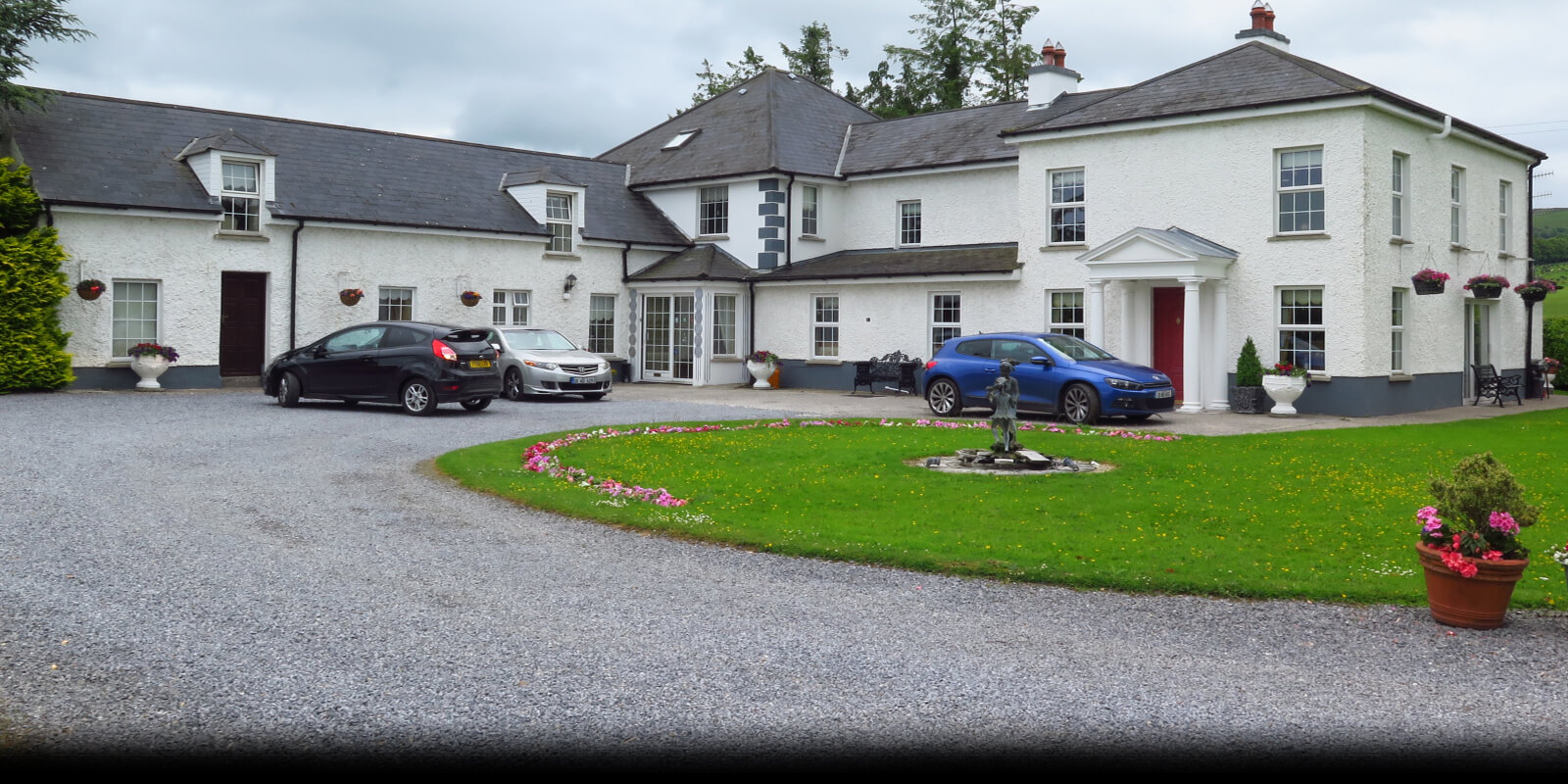 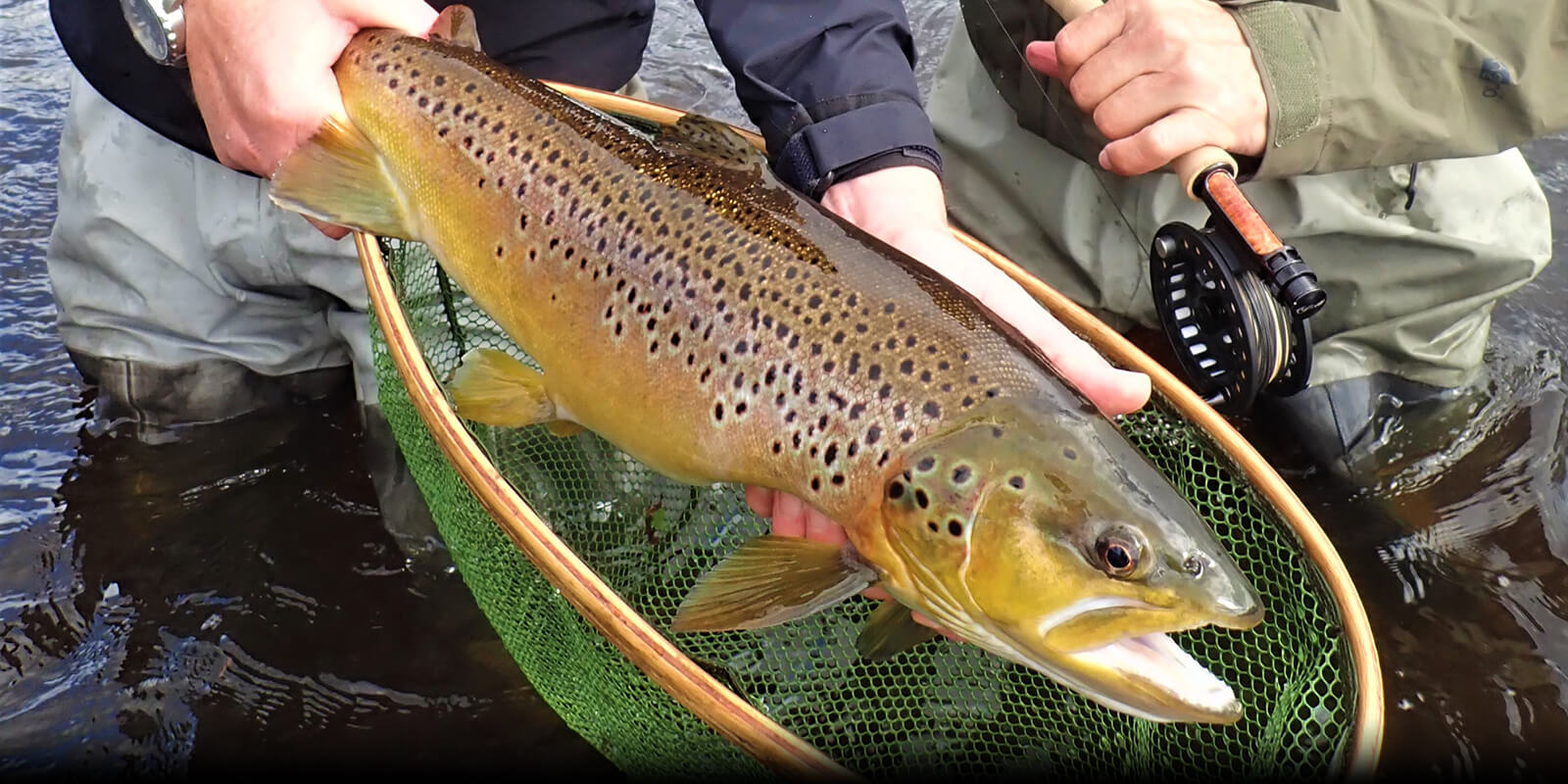 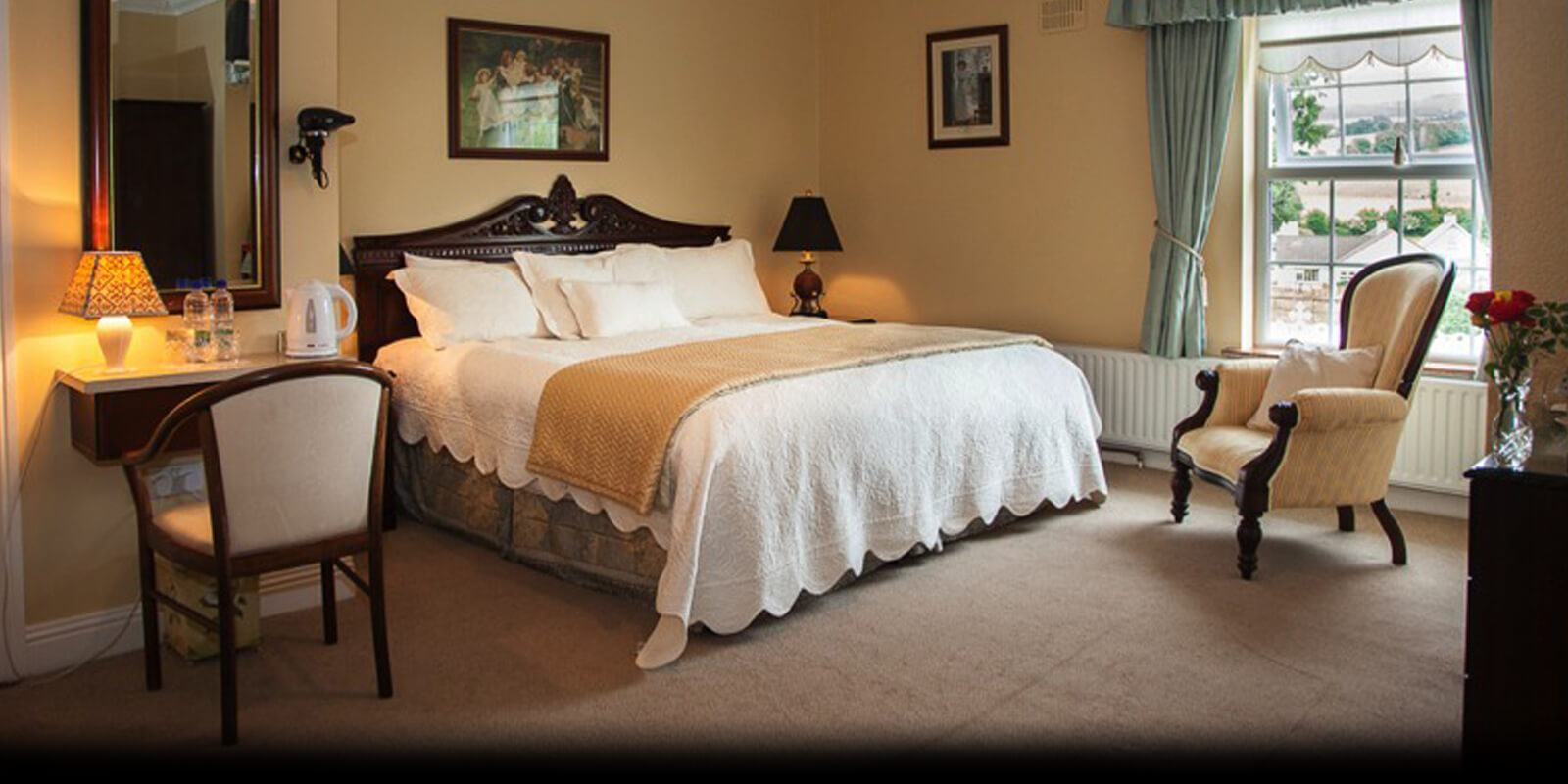 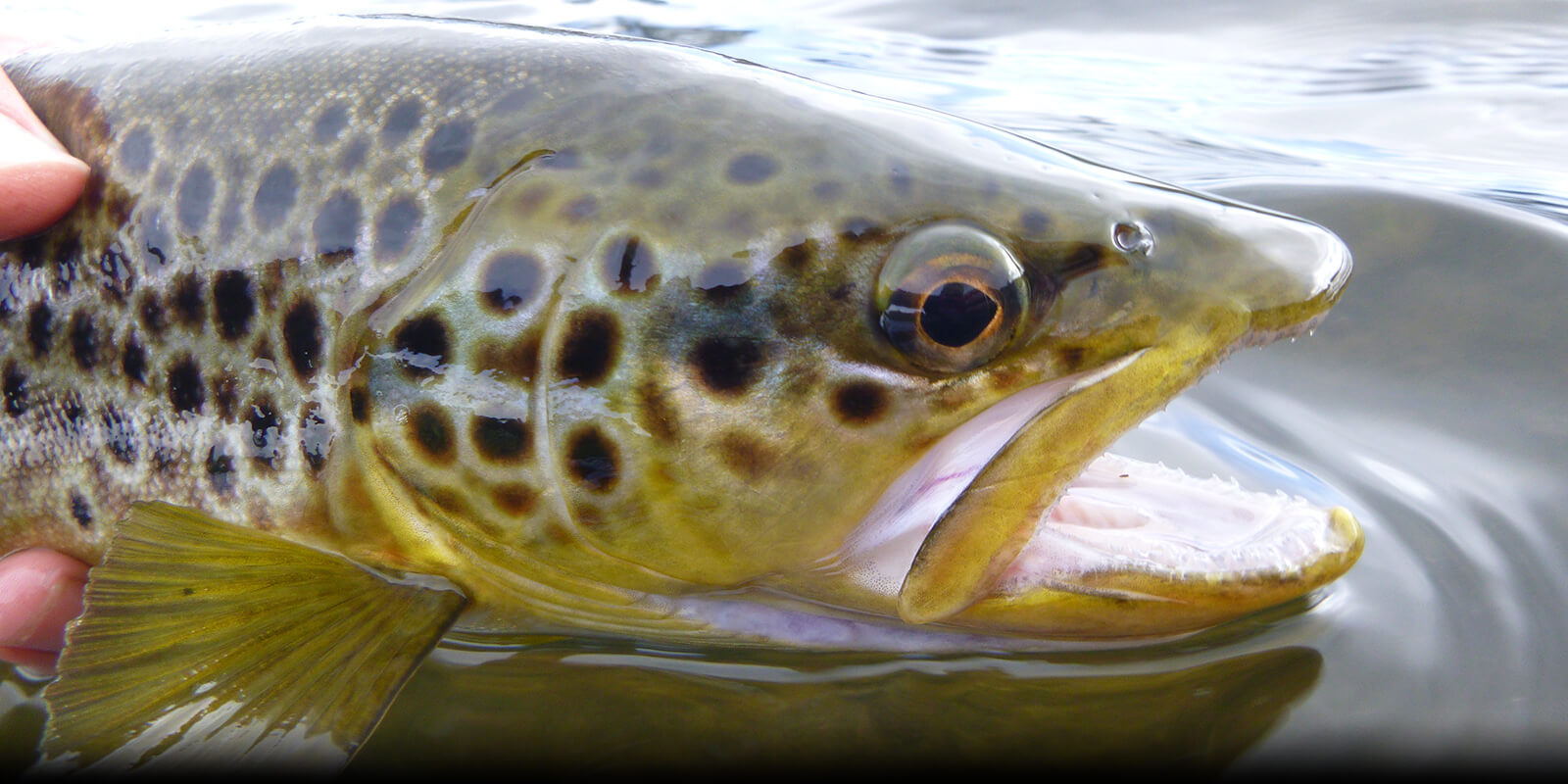 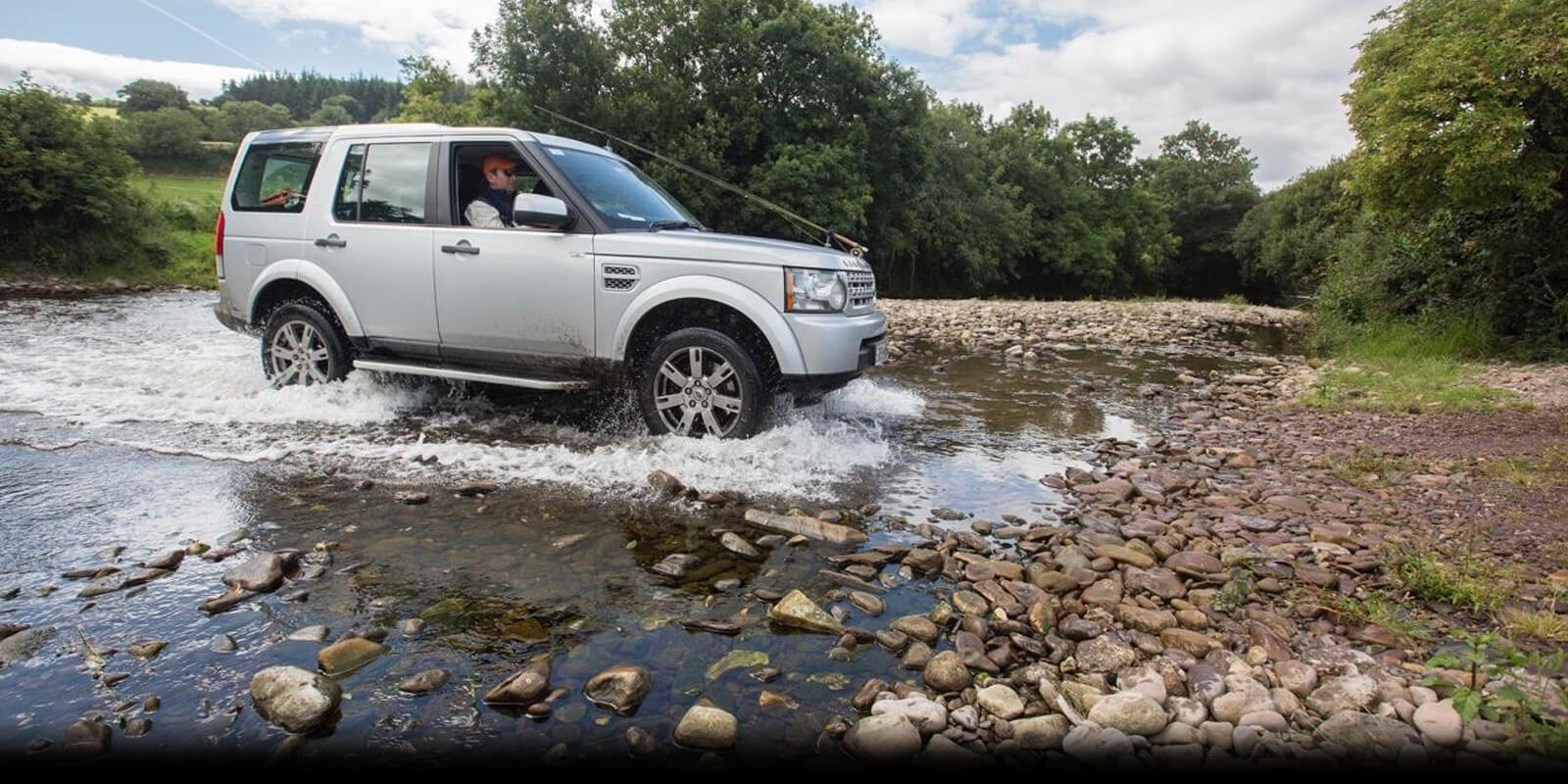 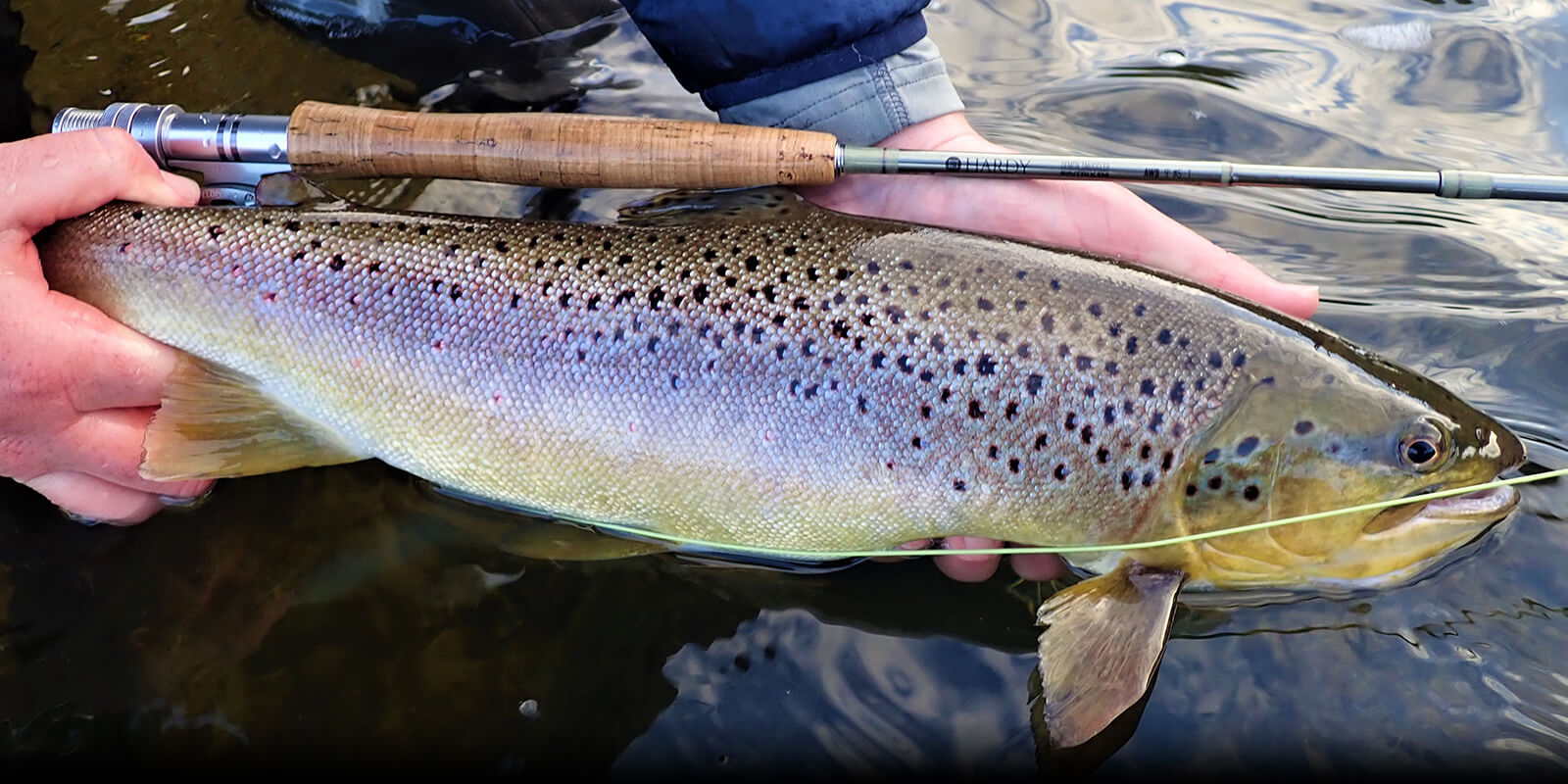 The regular arrival day is a Saturday, with the fishing program beginning the following day. However, depending on availability at the time of booking, we can often fit guests in to their schedule.

Guests fishing the Ballymacarby area for trout stay at a lovely converted farmhouse that is strategically located within the heart of many of the best rivers in the area. The farmhouse is spacious and situated high up in the hills in West Waterford. The bedrooms are all located on the second floor of the farmhouse. The rooms are all spacious and stylishly decorated. Each room is individually named and styled; each bedroom has its own private bath, with a couple of the rooms offering Jacuzzi’s. The rooms feature elegant decor, plush furnishings and all conveniences, which include showers or showers over a bath, TV, Broadband internet access, iron and ironing board available on request, tea and coffee making facilities, hairdryer and fresh Spring Water.

Breakfast and dinner are served on the ground floor of the inn, where guests will find the lounge and parlour. This facility truly does offer the quintessential “Irish experience” that many guests traveling to Ireland hope to find but rarely do. The hospitality and service are friendly and genuine. Another great aspect to staying at the farmhouse is that there is a great rural pub just a 5-minute walk down a lovely country road. The pub is situated on the banks of the River Nire so its possible to catch the evening rise and then wet your whistle with a pint of Guinness or a wee dram.

All visitors to Ireland require a passport valid for at least three months beyond their intended stay. American, Canadian, British and Australian citizens do not require visas and can stay in the country for up to three months.