At the southernmost tip of Andros, Jackfish Channel is a bonefish haven unto itself. Surrounded by protected flats and creeks, it is one of two comfortable anchorages chosen for the 74’ Hatteras to create a unique fishing opportunity from December through May. Seasoned Bahamian guides captaining custom-built ultra-skinny water Beavertail skiffs will lead guests on daily explorations across this magical seascape. Fish from the skiffs or take off wading. Novice anglers will be spoiled with numerous shots at feeding bones, while accomplished fly fishers can hunt and stalk, enjoy the adrenalin rush of the pursuit, spot that nervous water, catch the flash of a huge silver tail. And world-class reef and offshore fishing, featuring marlin, wahoo, tuna, and dorado, is just minutes away around the Grassy Creek Cays and in the Tongue of the Ocean.

Fishing your way to the Water Cays, and on up to Red Shank Point, it’s sometimes impossible to make any headway. The action can be too good to leave any given spot. Which brings you to your second idyllic anchorage set in the tranquility of the South Bight near the entrance to Miller Bay. The boat ride in the Bight feels like an adventure into primordial times. The water blends intense shades of blue and green over lush bottom structure. Green, yellow, and gold shorelines narrow as you head past numerous blue holes that can boil with jacks and cubera snappers. And this is the land of tarpon, throughout the Bight and along the West Side coastlines to the north and south, strong resident beauties that range from forty to one hundred pounds. Additional gamefish opportunities include permit, mutton snapper, barracuda and sharks.

The boats used while fishing from the Mothership are custom built, fully equipped Beavertail skiffs.

Upon arrival at the Congo Town Airstrip, guests will be met by the Live Aboard staff and will then be transferred over to the Driggs Hill dock where guests will meet their guides and board their skiffs to start the fishing day. Guest luggage will be transferred directly to the Mothership in a separate boat, where it will be waiting for you in the gust cabins when you arrive at the Mothership at the end of the fishing day.

Please note that private plane arrival and departures are easily accommodated at the Congo Town Airport.

We’re waiting on the owners of the boat to decide if they are going to operate at Andros in 2023. 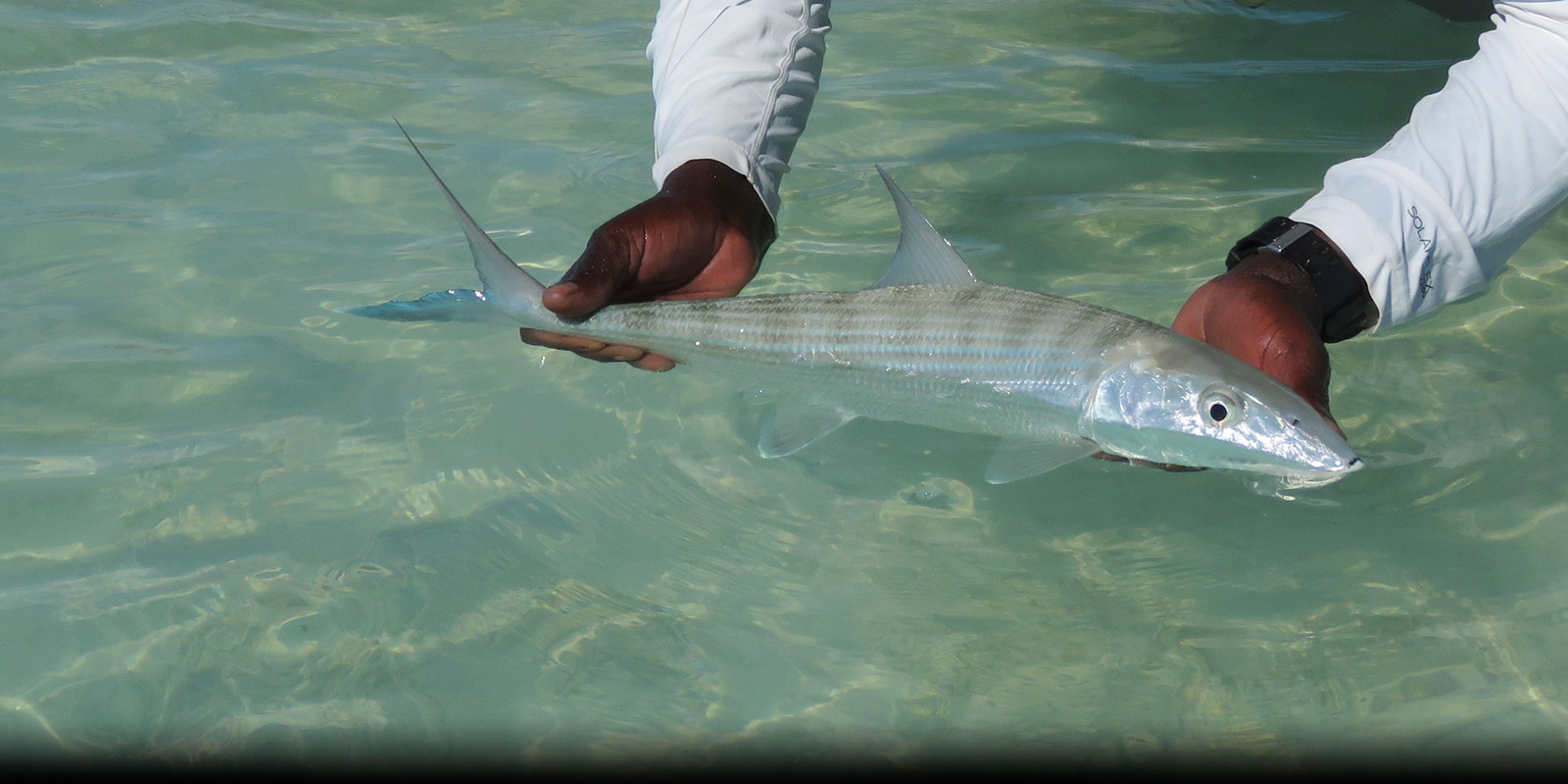 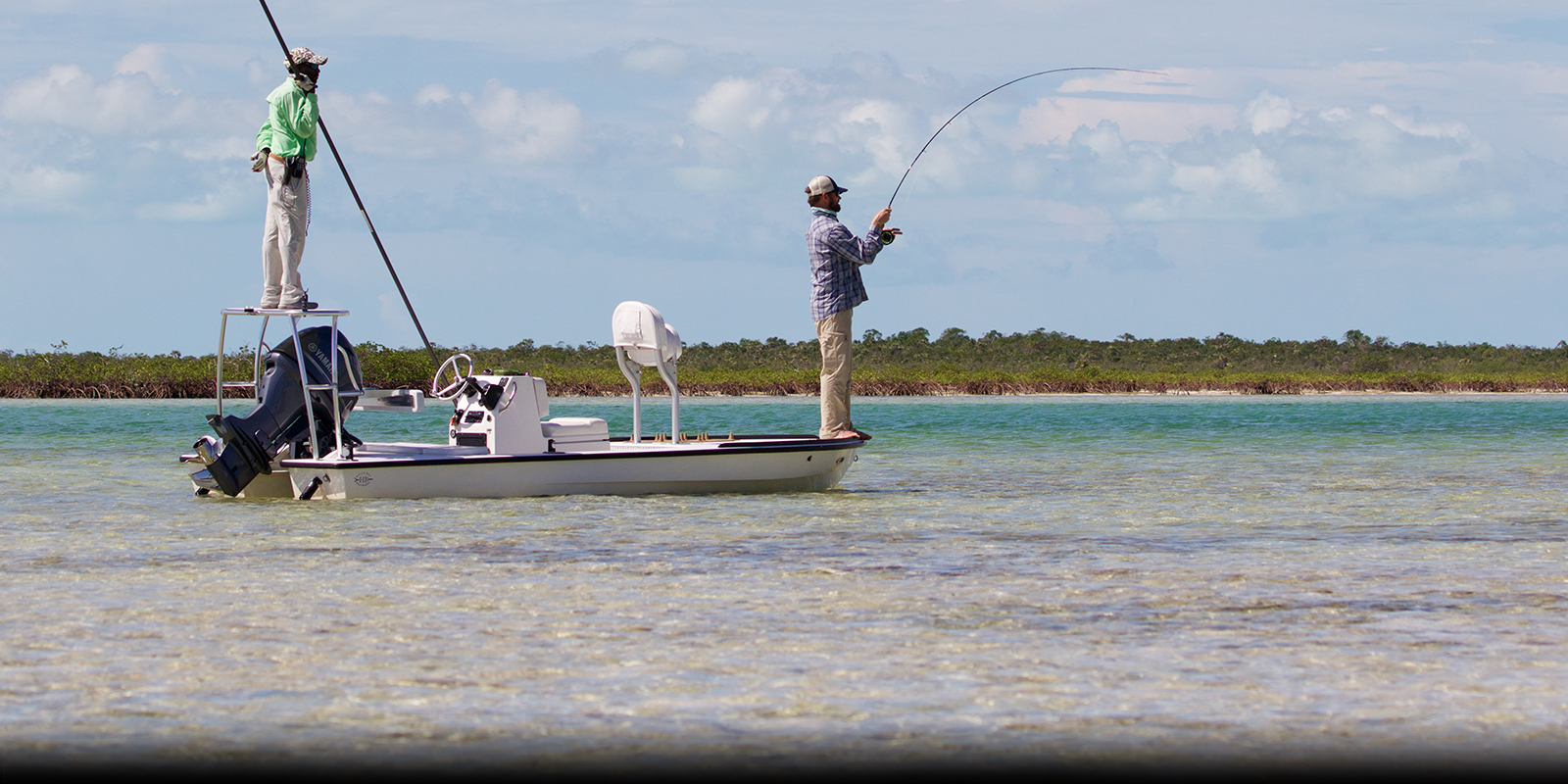 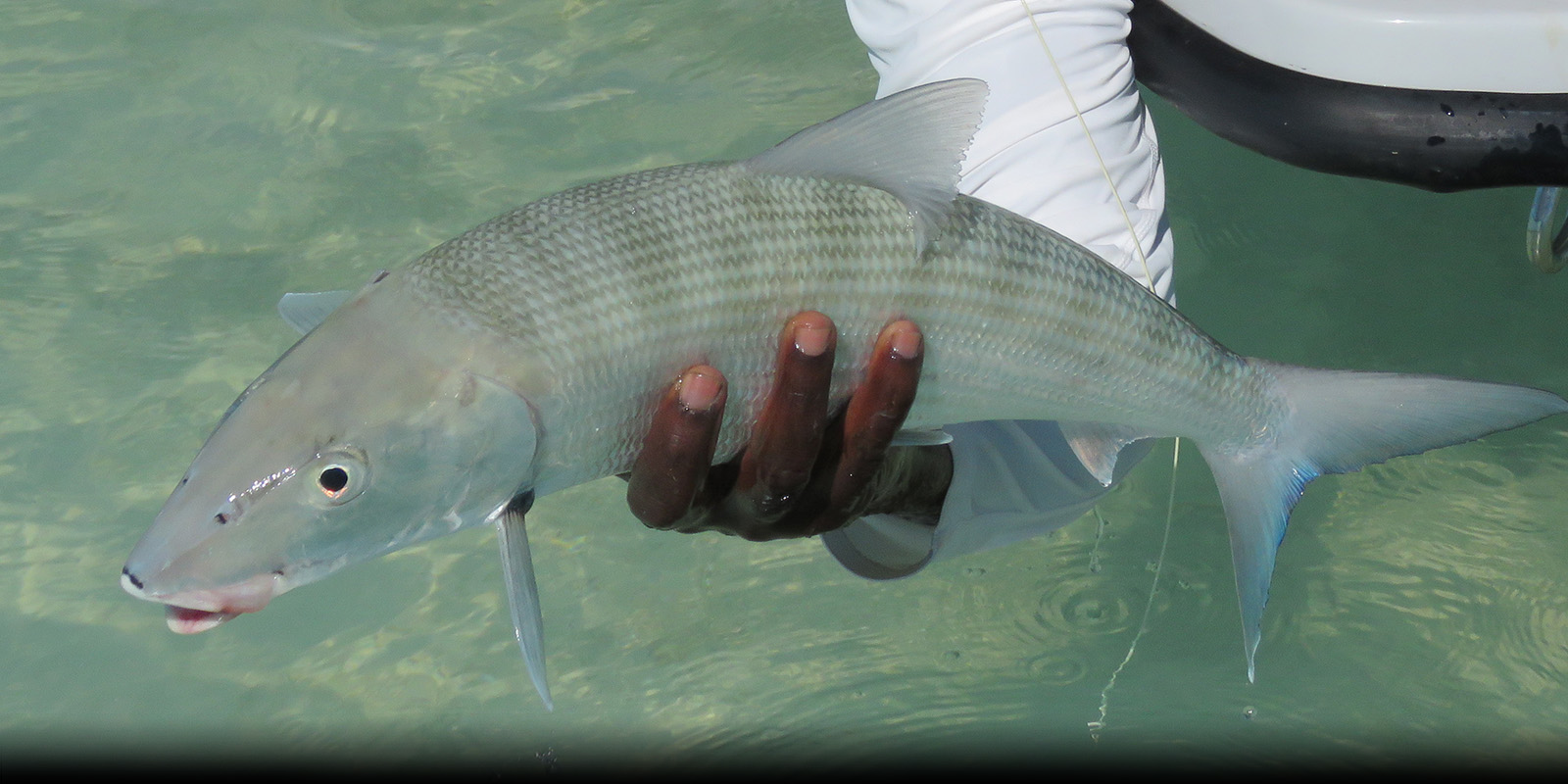 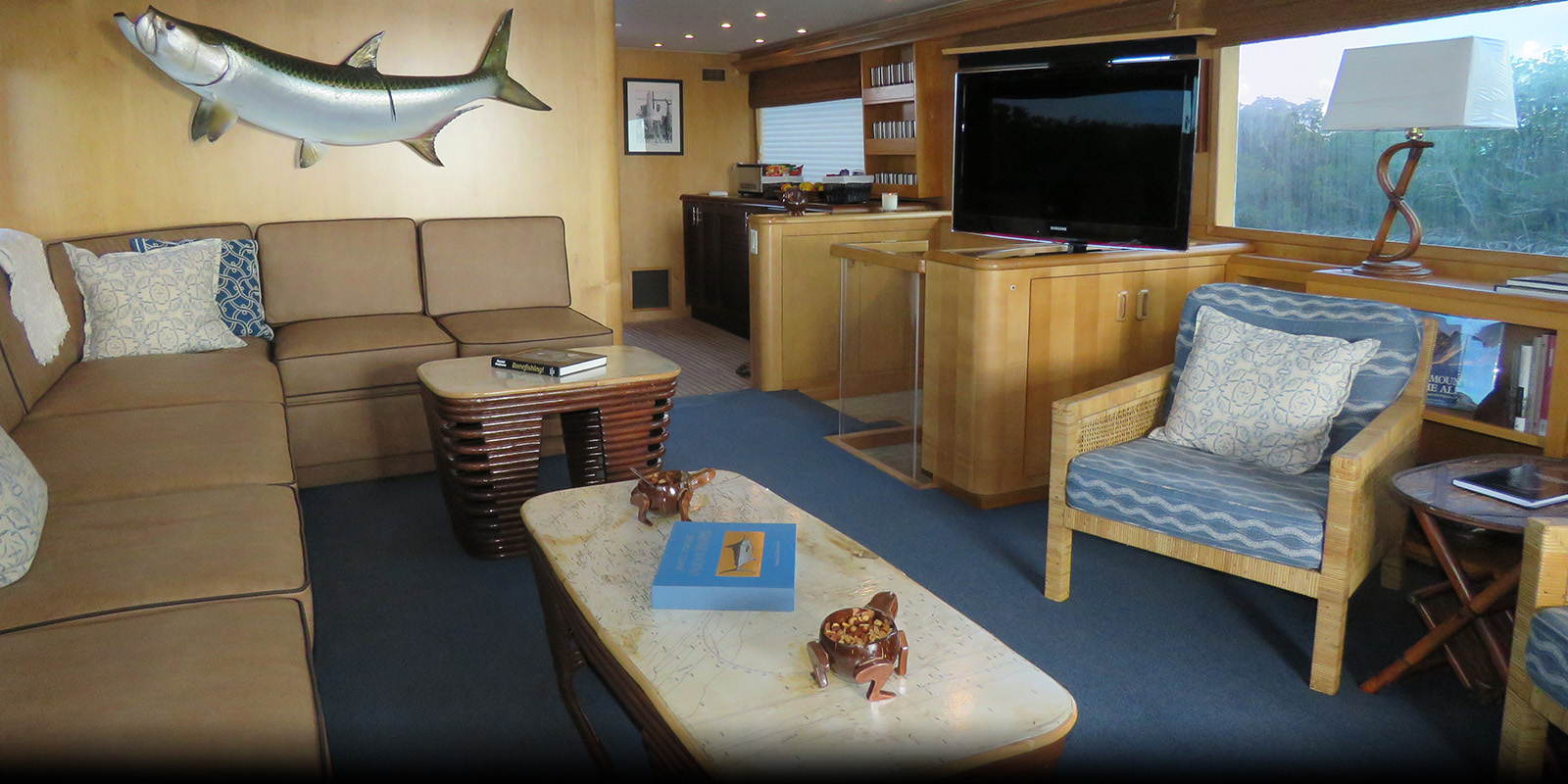 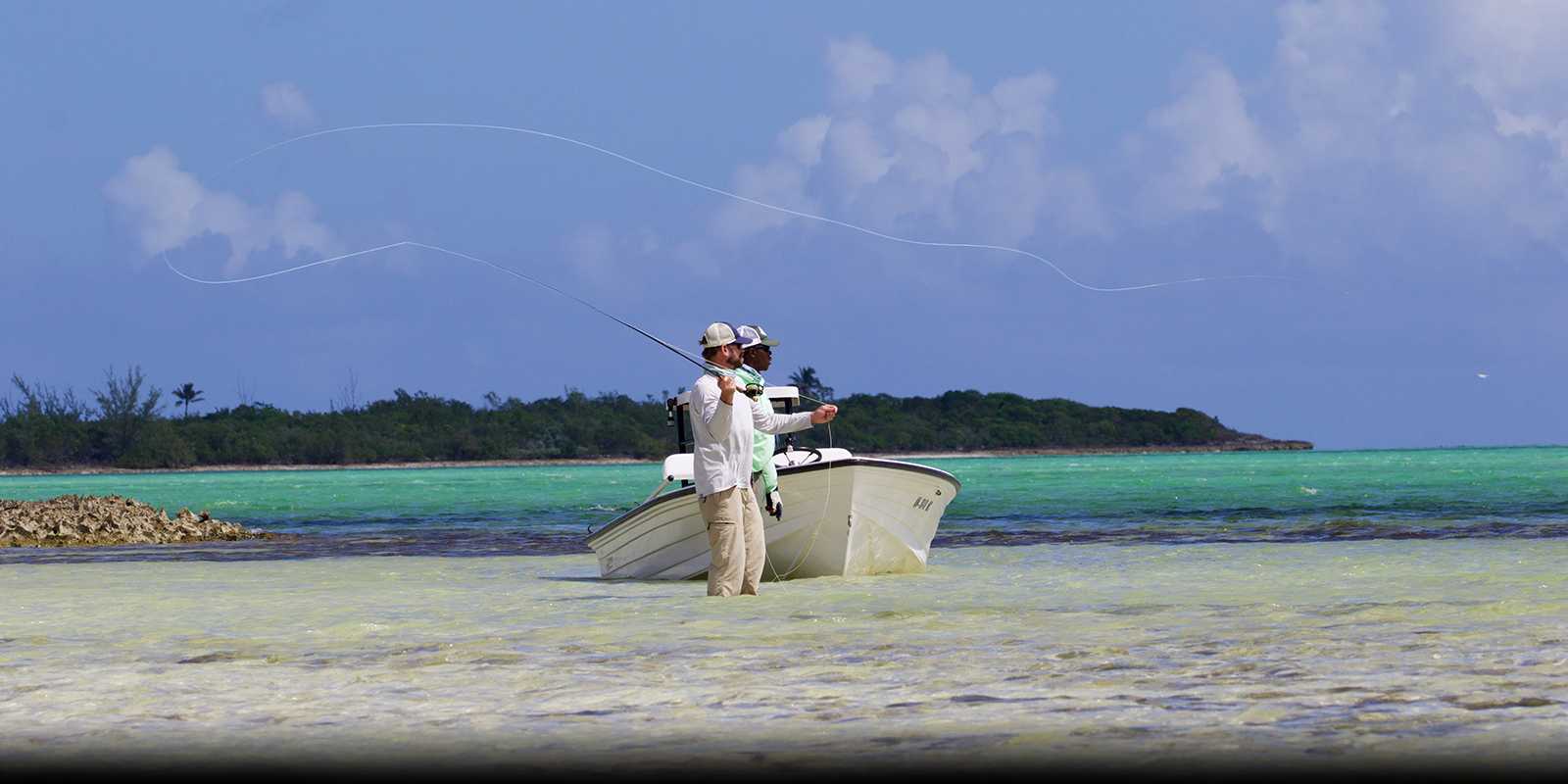 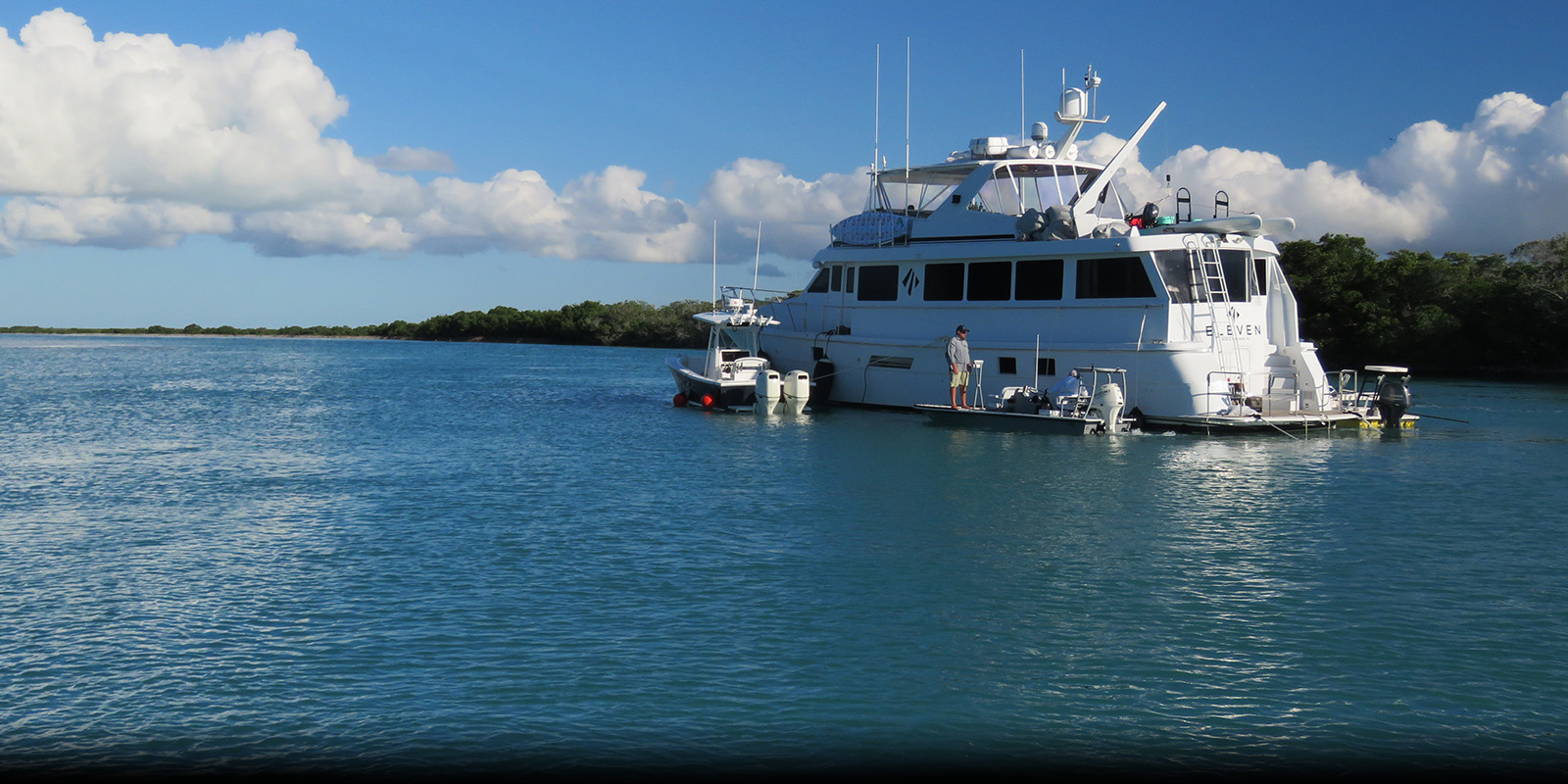 The Mothership is located in the remote Southwest side of Andros Island, which is part of the West Side National Park, Bahamas.

December through to the end of April

There are no set arrival/departure days for this location.

The Mothership is a luxurious, 74 foot Hatteras, live aboard allowing up to 6 guests on board; taking the live-aboard lifestyle to a whole new level with personalized service in a wonderfully intimate setting. With a private chef on board, you’re guaranteed to enjoy the savory, fresh, homemade Island cuisine each day. Flavourful lunches are prepared and packed up with ice cold drinks to keep your energy up while fishing out on the skiffs. And, with such personalized service, there’s no such thing as an 8 - 4 routine.

You can fish until you drop, all the while knowing the Mothership awaits your return, ready to refresh and recharge you. At the end of the day, enjoy comparing notes on the open upper deck, or in the air-conditioned lounge cabin, while sipping your favorite beverage and watching the sunset. And, sleep peacefully in one of the staterooms. There are three well designed guest rooms, each offering its own private bath. The Mothership offers two estate rooms with a king size bed that can be converted into two twin beds, and a Bow state room, accommodating 2 guests, each in a twin bed.

A valid passport good for 6 months AFTER the trip has been completed. Please note that the Bahamian Government is very strict about the 6 month stipulation and they’ve been known to turn anglers away who don’t have sufficient time left on their passport.